The Russian Army of the Napoleonic Wars (2): Cavalry (Men-at-Arms) (Paperback) 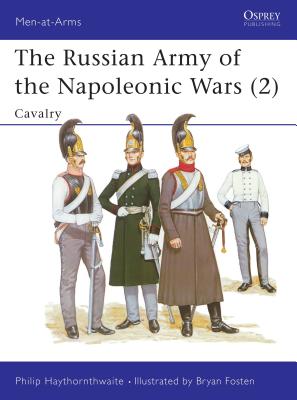 The Russian Army of the Napoleonic Wars (2): Cavalry (Men-at-Arms) (Paperback)

During the Napoleonic era, Russia possessed a vast force of cavalry, forming a greater percentage than that of most European armies. This stemmed partly from their service against the Turks, who had huge numbers of troops, and partly from the fact that much Russian terrain was suitable for the manoeuvre of large bodies of cavalry. This companion volume to Men-at-Arms 185 examines the organisation, tactics and uniforms of the Russian cavalry during this dynamic and turbulent period, covering Cuirassiers, Dragoons, Hussars, Uhlans, Mounted Jägers and the Lifeguard, as well as the Opolchenie militia and Cossacks.
Philip Haythornthwaite is an author and historical consultant specialising in the military history, uniforms and equipment of the 18th and 19th centuries. His main area of research covers the Napoleonic Wars. He has written some forty books, including more than 20 Osprey titles, and innumerable articles and papers on military history, but still finds time to indulge in his other great passion: cricket.