Big Wave Surfer: The Greatest Rides of Our Lives (Hardcover) 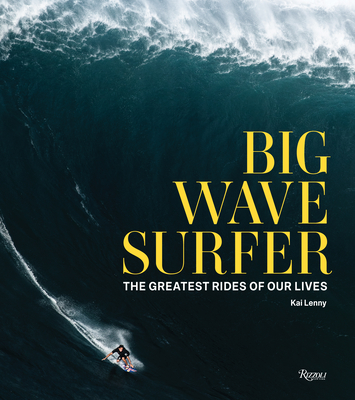 Big Wave Surfer: The Greatest Rides of Our Lives (Hardcover)


In Stock—Click for Locations
A jaw-dropping photographic display of the world of big wave surfing, featuring the biggest and most dangerous waves and the legendary men and women who risk their lives to surf them.


Over the last decade, a handful of surfers have been progressing the sport of big wave surfing to new extremes. Kai Lenny, one of the preeminent big wave surfers, offers readers a glimpse into this world. Lenny shares his personal stories and perspectives, and invites over 30 elite surfers—from legends who pioneered the way, to young guns who are the future of the sport—to contribute personal tales of the greatest waves ever ridden.

These are the stories we’ve been waiting for: Shane Dorian pushing the boundaries in the gladiator arena of Pe‘ahi (Jaws), Maui; Peter Mel on riding the greatest wave ever caught at Mavericks, California; Keala Kennelly breaking the women’s glass ceiling at the death-defying slabs of Teahupoo, Tahiti; Kai Lenny and Lucas Chumbo’s groundbreaking wins at the incredible Nazaré, Portugal; Brett Lickle’s epic incident at the mystical Pyramids with Laird Hamilton, and many more. Accompanying stunning photographs from the world’s top surf photographers capture the drama of life and death, and the unwavering commitment of these brave extreme athletes.
Hawaii-born Kai Lenny is one of the world’s most accomplished watermen pushing the sport of big wave surfing. He is the youngest person to be inducted into the Surfers’ Hall of Fame, winning countless awards throughout his career. Shane Dorian is a World Championship Tour veteran and WSL Big Wave Awards winner, and helped progress the sport of modern big wave surfing. Ian Walsh is a WSL Pe‘ahi Challenge winner and has been charging some of the biggest waves in the world since he was a teenager in Maui, Hawaii.

"[O]ne of the most impressive photographic tributes to [big wave surfing] ever published." —MAXIM

"Now, is there anything Maui’s Kai Lenny cannot do? Conquer oceanic mountains on all manner of craft, paddle between his islands like it was nothing at all, befriend the world’s 5th richest man and teach him to fly, charm two aging recently converted fitness buffs, revive the long-thought dead art of hardback book publishing. No, there is nothing he cannot do and, regarding the later, his gorgeous immortalization, published by Rizzoli, is due out October, 26th." —BEACH GRIT

"If racing down the face of a 70-foot-tall wave off the coast of Portugal sounds like a lifelong dream rather than a nightmare, you’ll appreciate this ode to big-wave surfing written by Hawaiian-born surfer Kai Lenny. Lenny shares stories and jaw-dropping photographs from his own escapades — including the time he successfully surfed that massive wave in Nazaré — alongside the experiences of 30 other big-wave surfers who have ridden giants across the globe, from Jaws in Maui to Teahupoo in Tahiti." —NEW YORK MAGAZINE

"It takes a special type of person to run toward danger. Or to paddle toward a massive wave. Most of us: not that type of person. But Kai Lenny is. He's one of the world’s best surfers, known for riding some of the world's biggest waves, and he's the youngest person to be inducted into the Surfers’ Hall of Fame. He's also the author of "Big Wave Surfer: The Greatest Rides of Our Lives," a new hardcover tome that offers an inside look at the sport. Throughout the book, Lenny shares his personal stories and perspectives, but he's also joined by more than 30 elite surfers—from old-school legends to exciting young athletes—who contribute tales of the greatest waves they've ever ridden. And since the book is published by Rizzoli, you know it's loaded with gorgeous imagery. Flip through the 304 pages to find photos of surfers riding waves in California, Maui and Nazaré, Portugal." —URBANDADDY.COM

"[Kai] Lenny's latest surfing endeavor is...sizeable: Big Wave Surfer is a 304-page large-format photography book that encompasses his journey as a surfer and waterman, but also shares the stories of more than 30 of the world’s top surfers with images from 50 of the world's best photographers alive today. The project took over two years to complete, and wouldn’t have been possible without the collaborative effort of the very people within its pages." —FIELD MAGAZINE