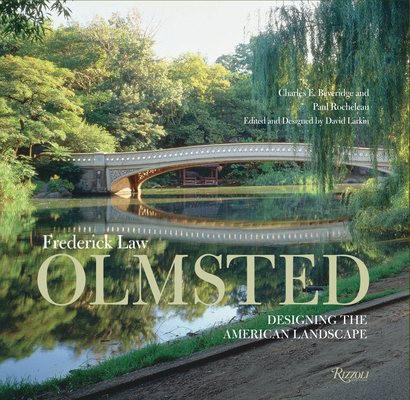 
In Stock—Click for Locations
An updated edition of the Rizzoli classic to mark the 200th anniversary of the birth of this seminal American landscape designer.


A landscape architect, city planner, and creative genius who transformed the American landscape, Frederick Law Olmsted was a man of passionate vision and drive. He defined the profession of landscape architecture and designed America’s most outstanding landscapes, many gorgeously illustrated here, including New York’s Central Park, Brooklyn’s Prospect Park, the U. S. Capitol grounds, and the Biltmore Estate. During a remarkable forty-year career that began in the mid-1800s, Olmsted created the first major urban parks and park systems in this country, along with widely influential suburban residential communities. He was a pivotal figure in the movement to create scenic reservations and national parks, such as Niagara Falls, Yosemite, and Yellowstone, and he contributed to the design of many academic campuses, including Stanford University.

A comprehensive view of the man and his work, this updated edition of the Rizzoli classic marks the 200th anniversary of the birth of this seminal American landscape designer and includes new photography of Olmsted’s masterworks Central and Prospect parks, as well as a new introduction and new final chapter by the author that examines Olmsted’s ongoing influence.
Charles E. Beveridge is series editor of The Papers of Frederick Law Olmsted, published by Johns Hopkins University Press. Paul Rocheleau is a distinguished photographer whose work has been published widely. David Larkin is a renowned editor and book designer.