Soupology: The Art of Soup From Six Simple Broths (Hardcover) 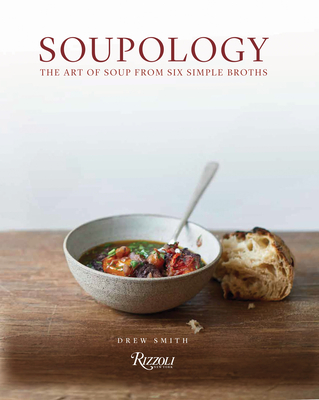 Soupology: The Art of Soup From Six Simple Broths (Hardcover)


Special Order—Subject to Availability
Easy to follow, this book is a master class on how to use six "mother broths" to create more than sixty delicious, zero-waste soups that can be nutritious full meals or accompaniments to larger celebrations.

From making simple broths to crafting superlative, showstopping soups, Drew Smith showcases how soups are really the perfect way to cook for the twenty-first century. A well-made soup is a sublime culinary creation--simultaneously well balanced, delicious, nourishing, and deeply comforting. Not only are soups good for the body, but they are also good for the planet--cooking soup enables the home cook to reduce food waste to almost zero.
Smith demonstrates how to build different variations of soups from six basic "mother broths": vegetable, poultry, meat, fish, shellfish, and kombu. Within each, there are subtypes and variations that lead to different finished soups--for instance, broth made from roast chicken bones is better used for richer, heartier soups like cream of chicken and mushroom, while broth from poached chicken is perfect for a light Roman stracciatella or a classic consommé.
Ultimately, the key to making a beautiful soup is knowing how to match the base broth to other ingredients, but the beauty of soup is that almost any pairing of ingredients can yield satisfying results. With some imagination and creativity, each recipe can be tweaked or remastered with variations of ingredients to create an almost infinite number of soups.
Drew Smith is former editor of The Good Food Guide, an annual review of Britain's best restaurants, which was a number one best seller for many years. He has been a restaurant writer for The Guardian and is a three-time winner of the Glenfiddich award.