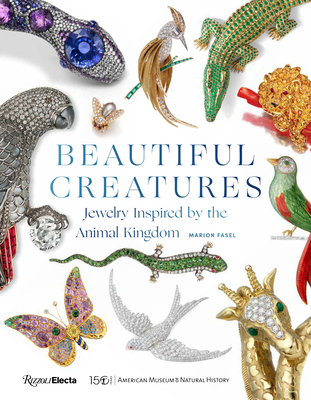 
Not On Our Shelves—Ships in 1-5 Days
Creatures from the animal kingdom represented in exquisite jewelry by renowned masters Cartier, Bulgari, Tiffany & Co., JAR, Belperron, David Webb, Schlumberger, Boucheron, and many other brilliant jewelers.

Many of the most imaginative designs by the world's great jewelry houses and artisans take inspiration from the animal kingdom. From Cartier's iconic panthers to Bulgari's snakes and JAR's butterflies, these spectacular objects dripping with precious stones are akin to wearable art. Beautiful Creatures depicts some of the most spectacular beasts ever transformed into sparkling treasures and accompanies a forthcoming special exhibition in the American Museum of Natural History's Allison and Roberto Mignone Halls of Gems and Minerals.

The 120 pieces featured date from the mid-1800s to the present, representing species from the realms of land, air, and water. Gorgeous studio photography of the jewelry is complemented by images of iconic personalities, including Elizabeth Taylor, Twiggy, and the Duchess of Windsor wearing famous animal-
inspired jewels. Guest curator Marion Fasel relays the stories behind the individual pieces through entertaining anecdotes and reveals the colorful histories and fascinating symbolism of these remarkable creatures in precious gems and metals that intrigue and delight and that we never tire of wearing.
Marion Fasel is a jewelry historian and author of several books on twentieth-century jewelry. She is the founder of the online jewelry magazine The Adventurine. In 2018 Fasel was the recipient of the GEM Award for Media Excellence and the Jewelry Champion Award from Town & Country magazine.
"The subtitle to Beautiful Creatures is Jewelry Inspired by The Animal Kingdom, but prepare yourself to see some of the most spectacular jewelry ever produced whose jumping off point was anything from a simple scallop shell or butterfly to some of the most incredible jungle inhabitants...The images are staggering, with accompanying text that offers you as much as you need to know as well as baiting you to want to see these pieces in the flesh, so to speak... This is a book for the jewelry aficionado as well for those who might have a passing interest in everything from ornithology to entomology to herpetology to batrachology to simple seashells. In other words, there are few creatures that have not been memorialized by these créateurs and incredibly gifted and skilled craftsmen. Get in line, wait for the opening of the exhibit at the Museum of Natural History, and get lost in the grandiosity of it all. In the meantime, you can be teased with the jaw dropping content of this book." — NEW YORK JOURNAL OF BOOKS

"Founder of the online jewelry magazine The Adventurine, Marion Fasel is a jewelry historian and author. Her latest book, Beautiful Creatures: Jewelry Inspired by the Animal Kingdom, just dropped, and spectacular beasts transformed into sparkling treasures? Thrilling. Marion took the time out of her busy book-release schedule to answer our jewelry fan questions." — MEETTHEJEWELERS.COM

"From Cartier’s iconic panthers to Bulgari’s snakes and JAR’s butterflies, some of the most imaginative designs by the world’s great jewelry houses and artisans take inspiration from the animal kingdom, creating spectacular objects dripping with precious stones to conjure wearable art. Beautiful Creatures: Jewelry Inspired by the Animal Kingdom depicts some of the most spectacular beasts ever transformed into sparkling treasures..." — ANTIQUES AND THE ARTS WEEKLY

"Beautiful Creatures by Marion Fasel is smaller than the typical coffee table book, which means it’s more portable and affordable too. But still utterly gorgeous: this would make a fantastic gift for a jewelry lover or animal aficionado in your life." — DIAMONDS IN THE LIBRARY.COM

"Fasel showcases the incredible creativity and diversity of animal-themed jewels and takes us through the history of influences and cultural shifts of the last 150 years....This menagerie of precious creatures is organised into the different habitats in which they dwell and is peppered with amusing and insightful gems of jewellery knowledge." — THEJEWELLERYEDITOR.COM

"Beastly Bling: Jewelry in the shape of an animal often comes with extra meanings, writes historian Marion Fasel in her new book “Beautiful Creatures: Jewelry Inspired by the Animal Kingdom” (Rizzoli Electa). When Prince Albert got engaged to Queen Victoria in 1839, he gave her a gold engagement ring in the form of a circling snake, to symbolize everlasting love. This set off a snake-jewelry fad, illustrated in the book by a circa-1850 French snake bracelet made of emeralds, diamonds, silver and gold, with pink sapphires for the eyes. Animal jewelry can also carry a political charge. In the early 20th century, American suffragists were nicknamed Iron Butterflies in honor of their determination, and many wore small butterfly pins to signal their support of the movement. More frivolous highlights among the book’s 120 pieces are a starfish designed by  Salvador Dalí and a zebra bracelet from American designer David Webb, who also made pieces that look like lions, fish and tortoises. A brooch in the form of a jellyfish, made of moonstones, sapphires,  diamonds, gold and platinum, was designed by Tiffany’s Jean Schlumberger to help heiress and art collector Bunny Mellon recover from a jellyfish sting in 1967." —WALL STREET JOURNAL

"Admirers of Marion Fasel’s The Adventurine have plenty to enjoy in her newest book, a knowing look at the animal kingdom depicted in gemstones and gold. In this friendly, intelligent romp through creatures that crawl, swim and fly, Marion pays homage to many-a-gilded creatures from renowned houses such as Cartier and Schlumberger, as well as anonymous makers throughout history. This darling book was done in association with New York’s American Museum of Natural History to mark the refurbished Allison and Roberto Mignone Halls of Gems and Minerals. Marion’s choices are smart and fun, and include many of jewelry’s most iconic creatures." —NATURAL DIAMOND COUNCIL