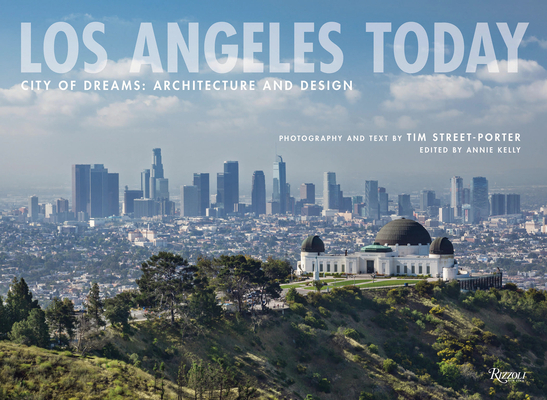 
Not On Our Shelves—Ships in 1-5 Days
The time is right for a fresh look at this incomparable sunny city. Longtime Angeleno Tim Street-Porter chronicles today's vibrant buildings, coastline, and gardens of this glamorous global metropolis.

Visit Los Angeles with a photographer who knows how to get the lighting right to highlight the spectacular architecture of the city. Stylish museums, such as the Broad, and a flourishing Arts District illustrate the explosive art scene, while Hollywood's Chateau Marmont and the historic Beverly Hills neighborhood add a chic dynamism. Across town, Culver City, home to the tech industry, features blocks of futuristic architecture by Eric Owen Moss. The modernist homes by Richard Neutra and John Lautner, as well as Frank Lloyd Wright's Hollyhock House, are shown against dramatic backdrops of sky and sea. The visual sweep of this oversize book also encompasses the Los Angeles of film and television.

Los Angeles is a city of dreams, and Los Angeles Today is a glorious portrait of the city in its infinite variety.
Leading architecture and design photographer Tim Street-Porter has written and photographed numerous books, including Los Angeles and L.A. Modern. He is also a contributor to lifestyle magazines.

Writer and designer Annie Kelly has authored many books, including the successful Rooms to Inspire series. She writes about lifestyle for such publications as Belle and the Los Angeles Times.
"The new book is 256 pages of the city’s spectacular architecture, including museums like the Broad, the flourishing Arts District, Hollywood’s Chateau Marmont and historic Beverly Hills. There are modernist homes by Richard Neutra, Rudolph Schindler, and John Lautner – as well as Frank Lloyd Wright’s Hollyhock House – all set against dramatic backdrops of sky and sea." —ARCHITECTS + ARTISANS

"Los Angeles is a city of dreams, and Los Angeles Today is a glorious portrait of the city in its infinite variety." —ENTREE TRAVEL NEWSLETTER

"Tour the city’s rich architectural and design history as well as a neighborhood-by-neighborhood stroll to visit stylish museums, the flourishing arts districts, chic homes, and the L.A. of film and television–all set against the dramatic backdrops of sky and sea." —SOCIETY TEXAS

"Los Angeles’s diverse landscapes and topography are the subject of this deluxe tribute by long-time Angelenos renowned architectural photographer Tim Street-Porter and design writer Annie Kelly. Think of it as a virtual tour of the fabled city, taking you through the historic Beverly Hills neighborhood, stylish museums like the Broad, landmarks like Hollywood’s Chateau Marmont as well as modernist homes by Richard Neutra, John Lautner, and Frank Lloyd Wright’s Hollyhock House." —INDULGE

"This book is absolutely amazing. Every page is covered with stunning greenery and lush water and land gardens, breathtaking architecture, and art beyond words." —SPLENDID SASS