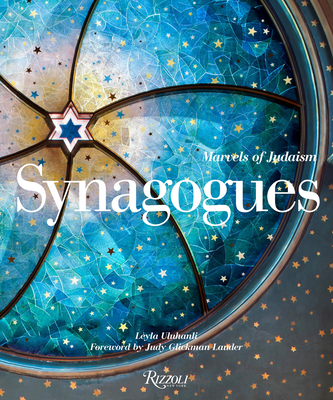 
Not On Our Shelves—Ships in 1-5 Days
The most significant volume on synagogue architecture and design to date—brought to life by a stunning array of newly commissioned and archival photographs.


This visually striking compendium illustrates the architectural and historical evolution of over 60 iconic synagogues worldwide. Beginning with the foremost archaeological sites in the Holy Land, it extends to the Jewish sanctuaries of Europe, North Africa, Russia, the Caucasus, Israel, and the New World, from the most ancient to the most innovative creations around the globe. Masterpieces such as Frank Lloyd Wright’s Beth Sholom Synagogue in Pennsylvania, the Grand Synagogue in Paris, New York’s Temple Emanu-El, and Dresden’s Neue Synagogue are all featured in magnificent detail. In a series of compelling essays, prominent scholars Lidia Chakovskaya, Steven Fine, Max Fineblum, Mohammad Gharipour, Samuel D. Gruber, Sergey R. Kravtsov, Michael Levin, and Edward van Voolen explore the diverse architectural styles that reflect the synagogue’s rich, complex, and often tragic history. Noted Judaic studies authority Aaron Hughes provides the introduction, highlighting the synagogue’s history and liturgical furnishings from silver menorahs and textiles to carved wooden cabinets and lanterns of eternal light. This gorgeously illustrated volume will appeal to those with an appreciation for art and architecture as well as lovers of Jewish history.
Leyla Uluhanli has had a lifelong fascination with sacred architecture for its lasting beauty and spiritual importance. She is the author of the highly praised Mosques: Splendors of Islam and a leading Moscow-based interior and furniture designer who works on projects worldwide. Judy Glickman Lauder is a prominent philanthropist supporting Jewish cultural-heritage endeavors and the author of Beyond the Shadows: Photographs of The Holocaust and The Danish Exception.
"Travel to the World’s Most Beautiful Synagogues: The book is one that demands attention..." —THE DAILY BEAST