Soccer in America: The Official Book of the US Soccer Federation (Hardcover) 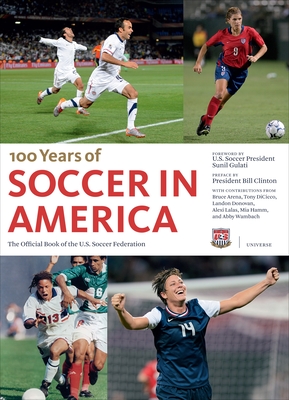 Soccer in America: The Official Book of the US Soccer Federation (Hardcover)


Special Order—Subject to Availability
The official, definitive, and unique celebration of a century of achievement in U.S. soccer. With one of the fastest-growing domestic leagues in the world and national teams asserting their presence on an international stage—and the U.S. womens’ team taking the gold medal at the London 2012 Olympic games—American soccer is at a peak. Opening its archives for the first time, the U.S. Soccer Federation takes us on a visual journey, from the introduction of the beautiful game a century ago in the amateur leagues of towns in the industrial northeast to soccer’s dominance as the fastest-growing sport across America today. This book is illustrated with remarkable and rarely seen mementos, from vintage portraits of the first national teams in the 1920s to game programs, ticket stubs, jerseys, and exciting pictures of today’s and past stars in action. With contributions from stars spanning generations of American soccer, including firsthand testimonies from coaches and players themselves, the book profiles the most talented players of the men’s and women’s national teams over the decades, looks at the coaches who have changed the game, celebrates the most memorable moments and unforgettable goals, and chronicles the U.S.’s greatest achievements, from the World Cup to the Olympics.
The United States Soccer Federation is the national governing body of soccer. Founded in 1913 in New York, it has gone on to oversee dozens of regional leagues and several national leagues, host the World Cup in the United States in 1994, and establish the multimillion dollar MLS that is the backbone of club soccer in America today.
ABC-TV/Good Morning America -- Josh Elliot's pick for Favorite Coffee Table Book of 2013

“Ultimate Soccer Lovers Gift. A joy to read. Five star rating. Probably the best gift for someone who is passionate about the beautiful game. America’s love affair with the beautiful game is well chronicled in this amazing too-good-to-put-down coffee table book…gloriously documents with amazing photography and stories our path to today and is a MUST HAVE for soccer lovers around the world…this book has something for everyone and can be loved by all. 100 Years of Soccer in America is an amazing resource for any soccer fan, as well as an important addition to American sports history…this remarkable volume contains contributions and first-hand testimonials from some of the biggest names in the sport reflecting on the most memorable moments, and unforgettable goals, and chronicling the U.S.’s greatest achievements.” ~SoccerNation

"U.S. Soccer opened its archives to offer an in-depth look at the history of the sport with 100 Years of Soccer in America , the official, definitive, and unique celebration of a century of achievement in U.S. Soccer." ~ChicagoNow

“This book is a definitive pictorial history of the last century in American men’s and women’s soccer. You will find a tremendous array of historical and current-day images that brilliantly document the long journey of American soccer.” ~worldfootballcommentaries.com