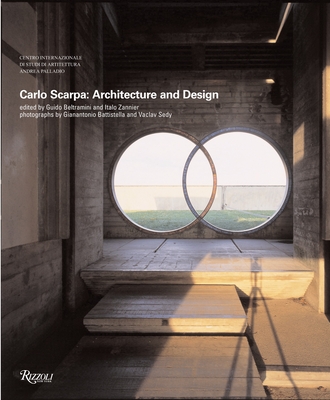 
Not On Our Shelves—Ships in 1-5 Days
Carlo Scarpa was a virtuoso of light, a master of detail, and a connoisseur of materials. Today he is known as a 20th-century master of architecture. To mark the first centenary of Scarpa's birth, all his works are presented here for the first time. The 250 illustrations cover all 58 of his structures, including the Castelvecchio Museum (Verona), the Olivetti showroom (Venice), and the Brion Tomb in San Vito d'Altivole (Treviso), as well as his important glass designs. The book includes essays by leading architects and architecture critics, offering an extensive overview of Scarpa's life as well as interpretations of his architecture. Known as the "Frank Lloyd Wright of Italy," Scarpa's decorative style has become a model for architects wishing to revive craft and luscious materials in the contemporary manner.
Guido Beltramini, director of the Centro Internazionale di Studi de Architettura has curated the exhibitions for Carlo Scarpa in Verona and Vicenza. Italo Zannier is a leading international photography expert and holds the chair of the history of photography at Venice University. He documented many of Scarpa's works when he worked as a professional photographer.
“Carlo Scarpa… combined a sensitivity to traditional materials and craftsmanship with an abstract sensibility. Scarpa’s work in Venice, Verona, and surrounding towns uses an evocative layering of walls, spaces, geometric ornamentation, and finely crafted stone and metal to evoke an image of modernity where the human hand is aided rather than replaced by the machine… All offer a brilliant vision of cultural transformation that is worth seeking out as a complement, or antidote, to the usual trek from ancient monument to ancient monument.” ~The Boston Phoenix

“The 20th Century Italian master Carlo Scarpa (1906-1978) emerged from a Venetian tradition that merged art, craft, intellect, and, especially in his case, architecture…Photos in this book make clear that Scarpa’s works may need reviving, lest they too pass away.” ~Architecture

“For this chronological presentation of Scarpa’s five-decade career, spanning 1932 to 1978, the photographers visited all 58 of the Italian master’s completed structures (all but one in Italy), creating a gorgeous set of images in the process. Scarpa was often called upon to integrate his architecture into and around existing historic buildings, and the delicacy of these interventions still stand out.” ~Metropolis Magazine