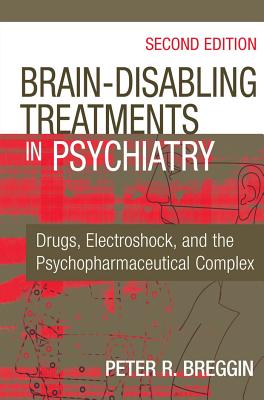 
Not On Our Shelves—Ships in 1-5 Days
(This book cannot be returned.)
From the author of Toxic Psychiatry and Talking Back to Prozac:

Peter Breggin is the conscience of American psychiatry. Once more he updates us on the real evidence with respect to the safety and effectiveness of specific psychiatric medications and ECT. This information is needed by all mental health professionals, as well as patients and families." --Bertram Karon, Ph.D., Professor of Psychology, Michigan State University, Author of The Psychotherapy of Schizophrenia

"Nowhere does false medical thinking do more harm than in the modern psychiatric argument that mental illness is easily diagnosed and then cured by a side-effect free drug. Nowhere is the correct psychiatric thinking more evident than in the books by Peter Breggin. -- William Glasser, MD, psychiatrist, author of Reality Therapy

Many of Breggin's earlier findings have improved clinical practice, led to legal victories against drug companies, and resulted in FDA-mandated changes in what the manufacturers must admit about their drugs. Yet reliance on these drugs has continued to escalate in the last decade, and drug company interests have overwhelmed psychiatric practice.

This greatly expanded second edition, supported by the latest evidence-based research, shows that psychiatric drugs achieve their primary or essential effect by causing brain dysfunction, and that they tend to do far more harm than good.

Chapters covering every new antidepressant and stimulant drug Twenty new guidelines for how to conduct non-drug therapy A chapter describing how to safely withdraw from psychiatric drugs A discussion of "medication spellbinding," explaining how patients fail to appreciate their drug-induced mental dysfunctions Documentation of how the drug companies control research and the flow of information about psychiatric treatments