A Slip of a Girl (Paperback) 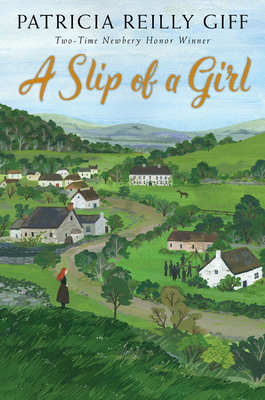 A Slip of a Girl (Paperback)


On Our Shelves Now at:
A heart-wrenching novel in verse about a poor girl surviving the Irish Land Wars, by a two-time Newbery Honor-winning author.

For Anna, the family farm has always been home... But now, things are changing.

Anna's mother has died, and her older siblings have emigrated, leaving Anna and her father to care for a young sister with special needs. And though their family has worked this land for years, they're in danger of losing it as poor crop yields leave them without money to pay their rent.

When a violent encounter with the Lord's rent collector results in Anna and her father's arrest, all seems lost. But Anna sees her chance and bolts from the jailhouse. On the run, Anna must rely on her own inner strength to protect her sister--and try to find a way to save her family.

Written in verse, A Slip of a Girl is a poignant story of adversity, resilience, and self-determination by a master of historical fiction, painting a haunting history of the tensions in the Irish countryside of the early 1890s, and the aftermath of the Great Famine.

A Junior Library Guild Selection
A Bank Street Best Book of the Year
Patricia Reilly Giff (1935 - 2021) was the author of more than one hundred children's books, including the Newbery Honor Award titles Lily's Crossing and Pictures of Hollis Woods.  She spent twenty years teaching in the New York City public schools, and her Polk Street School series remains a popular chapter book mainstay. Some of her other middle grade novels include Genevieve's War, winner of the Christopher Award; Nory Ryan's Song, an ALA Notable Book; and A Slip of a Girl, which received two starred reviews.
★ "Written in free verse, the story moves quickly, but the clarity of the writing and the images created leave strong impressions of the characters and settings. The subtly shifting emotional tenor of the narrative ranges from pensive to sorrowful and from desperate to hopeful. . . . A vivid, involving historical novel."—Booklist, Starred Review

"Anna's simultaneous desperation and determination are palpable . . . Archival photos illuminate the loss and injustice inflicted on the Irish, and Giff (Lily's Crossing) brings Anna's story to a triumphant close."—Publishers Weekly

"Giff draws on personal family history to tell Anna's painful and courageous story. Written in verse, this is a great introduction to Irish history and the genre of historical fiction. Primary source photographs and a glossary lend to the novel's authenticity.  This is a great selection for young fans of historical fiction who may not be ready for something weightier."—School Library Journal

"In late-nineteenth-century Ireland, the Mallon family struggles to stay in their home and farm their land—land now controlled by an English earl determined to evict them by raising rents and taxes. . . . Giff employs small incidents, such as the carding of wool or Anna’s rationing potatoes, to create a substantial setting, while archival photographs sprinkled throughout link these moments to the conditions of the larger community and history."— The Horn Book