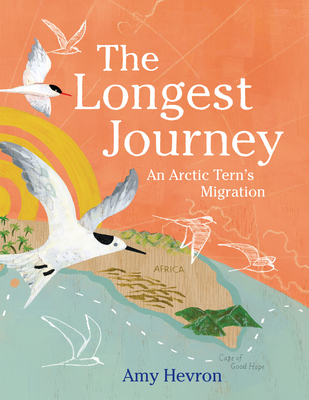 
On Our Shelves Now at:
Follow the epic annual migration of an Arctic Tern on its sixty-thousand-mile journey to the South Pole and back again, the longest such migration in the animal kingdom.

In their thirty-year lifetimes, Arctic Terns travel nearly 1.5 million miles, that’s enough to fly to the Moon and back three times! Each year they brave blistering winds, storms, rough seas, and airborne predators as they travel between the Earth’s poles, chasing the summer. In The Longest Journey: An Arctic Tern’s Migration, we follow one such bird as it spreads its wings and sets out to make its first globe-spanning trip with its flock.

Amy Hevron is the illustrator of Trevor by Jim Averbeck, the recipient of multiple starred reviews. She also illustrated Candace Fleming’s The Tide Pool Waits which was the recipient of the Portfolio Honor Award from the Society of Children's Book Writers and Illustrators. Her brilliant, naturalistic artwork mimicking maps and nautical charts is supported by extensive research and paired with material at the back of the book explaining the science behind the life cycle of Arctic Terns.

A Junior Library Guild Gold Standard Selection
Amy Hevron is an illustrator, designer and children’s book author. She wrote and illustrated Dust Bunny Wants a Friend and illustrated Trevor by Jim Averbeck, which received multiple starred reviews. She also illustrated The Tide Pool Waits, by Candace Fleming. In both 2015 and 2016, she received the Portfolio Honor Award from the Society of Children's Book Writers and Illustrators. She lives in Seattle with her family.
"A wooden background lends a textured, stylized touch to the lovely illustrations, all of which impart real sense of movement and the grand scale of travel. . . . A remarkable depiction of a truly extraordinary natural wonder."—Booklist

"Young wildlife enthusiasts will thoroughly enjoy learning about the Arctic tern’s annual trek in this recommended purchase for libraries with vast wildlife collections, especially those with a proclivity for literary nonfiction."—School Library Journal

"Hevron's creative acrylic paintings and evocative, cool-toned sketches of the terns, sea, land, and sky are executed on wood and altered digitally to take advantage of the wood-grain textures in backgrounds and negative spaces."—The Horn Book