The History of Western Art in Comics Part Two: From the Renaissance to Modern Art (Paperback) 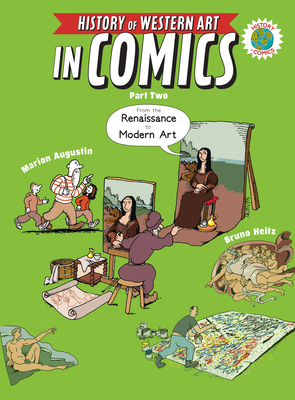 The History of Western Art in Comics Part Two: From the Renaissance to Modern Art (Paperback)


On Our Shelves Now at:
Learn even more about art through the ages in this humorous and informative graphic novel sequel.

Two kids and their grandpa continue their adventurous guided exploration of art, civilization, and how they interacted and evolved to become something entirely new. Continuing with the Renaissance and iconic works such as The Last Supper, the Mona Lisa, and the Sistine Chapel, the book winds its way through to the work of Vincent van Gogh, the surrealist movement, to Jackson Pollock, and more.

Written by a tour guide for museums and historic landmarks, the text is designed to entertain (with many funny asides and jokes) as it informs. The illustrations accurately portray the art and the artists described, with flavor and humor added to keep readers turning the page. Reproductions of the featured artworks and information about each piece are included in the back, along with a glossary of terms.
Marion Augustin is a tour guide for several museums and historic landmarks in France. She lives in the Parisian suburbs.

Bruno Heitz has written and illustrated many books for children in France. He lives in Saint-Rémy-de-Provence.
"[A] mix of erudition and visual humor. . . ."—Wall Street Journal

"Western art history becomes a joyful journey in this information-packed comic. This second volume of History of Western Art in Comics begins where the first left off and follows the development of artistic movements in the context of social and cultural shifts through the late 20th century."—Kirkus Reviews