Because They Marched: The People's Campaign for Voting Rights that Changed America (Hardcover) 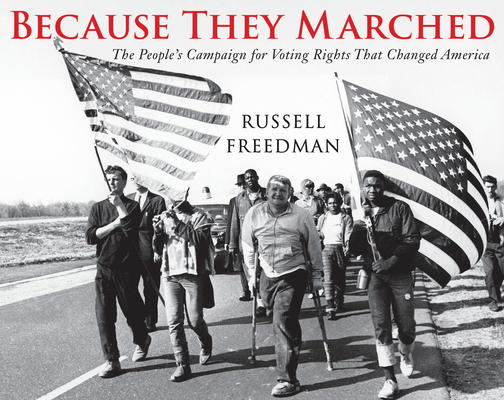 Because They Marched: The People's Campaign for Voting Rights that Changed America (Hardcover)


Special Order—Subject to Availability
The struggle for voting rights was a pivotal event in the history of civil rights.

For the fiftieth anniversary of the march for voting rights from Selma to Montgomery, Alabama, Newbery Medalist Russell Freedman has written a riveting account of African-American struggles for the right to vote.

In the early 1960s, tensions in the segrated South intensified. Tired of reprisals for attempting to register to vote, Selma's black community began to protest. In January 1965, Dr. Martin Luther King Jr. led a voting rights march and was attacked by a segregationist. In February, the shooting of an unarmed demonstrator by an Alabama state trooper inspired a march from Selma to the state capital. The event got off to a horrific start on March 7 as law officers brutally attacked peaceful demonstrators. But when vivid footage and photographs of the violence was broadcast throughout the world, the incident attracted widespread outrage and spurred demonstrators to complete the march at any cost.

Illustrated with more than forty archival photographs, this is an essential chronicle of events every American should know.

A Kirkus Best Book of the Year
A Junior Library Guild Selection
Russell Freedman (1929-2018) transformed non-fiction for children through his insightful narrative, comprehensive research, careful selection of photographs, and deep understanding of his subject matter. He was well known for his riveting biographies and masterful accounts of the history of the United States. One of the most honored writers for children, his many awards include the Newbery Medal, three Newbery Honor Medals, the Laura Ingalls Wilder Award, the May Hill Arbuthnot Honor Lecture Award and a National Humanities Medal. Major works include Freedom Walkers; Lincoln: A Photobiography; Because They Marched; The Wright Brothers: How They Invented The Airplane; Vietnam: A History of the War.
*  "Richly illustrated, this deserves a place alongside other important depictions of this story." —Kirkus Reviews, Starred Review

* "Commemorating the upcoming 50th anniversary of the 1965 march for voting rights from Selma to Montgomery, Freedman delivers a thorough account of the context and events leading up to and through this momentous protest....The momentum-building narrative and often-graphic b&w photos captivate as they recount demonstrations big and small: from sit-ins and 'wade-ins' (for desegregated beaches) to the well-known Selma schoolteachers’ march and 'Bloody Sunday' at the Edmund Pettus Bridge." —Publishers Weekly, Starred Review

* "The many well-chosen black and white photos record significant events, capture dramatic moments, and show individuals who took part in these historic events. With a timeless narrative and a timely epilogue, this handsome volume offers a vivid account of a pivotal moment in American history." —Booklist, Starred Review