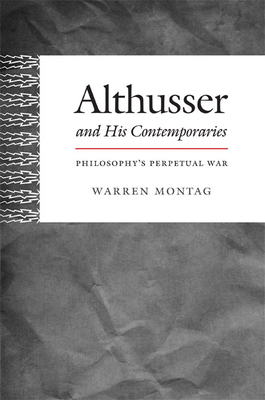 
Not On Our Shelves—Ships in 1-5 Days
Althusser and His Contemporaries alters and expands understanding of Louis Althusser and French philosophy of the 1960s and 1970s. Thousands of pages of previously unpublished work from different periods of Althusser's career have been made available in French since his death in 1990. Based on meticulous study of the philosopher's posthumous publications, as well as his unpublished manuscripts, lecture notes, letters, and marginalia, Warren Montag provides a thoroughgoing reevaluation of Althusser's philosophical project. Montag shows that the theorist was intensely engaged with the work of his contemporaries, particularly Foucault, Derrida, Deleuze, and Lacan. Examining Althusser's philosophy as a series of encounters with his peers' thought, Montag contends that Althusser's major philosophical confrontations revolved around three themes: structure, subject, and beginnings and endings. Reading Althusser reading his contemporaries, Montag sheds new light on structuralism, poststructuralism, and the extraordinary moment of French thought in the 1960s and 1970s.