Walking the Wrack Line: On Tidal Shifts and What Remains (Hardcover) 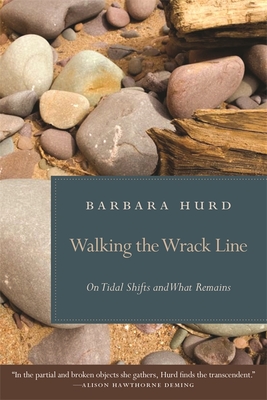 Walking the Wrack Line: On Tidal Shifts and What Remains (Hardcover)

Barbara Hurd continues to give nature writing a human dimension in this final volume of her trilogy that began with Stirring the Mud and Entering the Stone. With prose both eloquent and wise, she examines what washes ashore, from the angel wing shells to broken oars. Even a merman appears in this brilliant collection that throws light on the mysterious and the overlooked.

Writing from beaches as far-flung as Morocco, St. Croix, or Alaska, and as familiar as California and Cape Cod, she helps us see beauty in the gruesome feeding process of the moon snail. She holds up an encrusted, still-sealed message bottle to make tangible the emotional divide between mother and daughter. She considers a chunk of sea glass and the possibilities of transformation. The book began on a beach, Hurd says, "with the realization that a lot of what I care about survives in spite of--perhaps because of--having been broken or lost for a while in backward drift. Picking up egg cases, stones, shells, I kept turning them over--in my hands and in my mind." Each chapter starts with close attention to an object--a shell fragment of a pelican egg, or perhaps a jellyfish--but then widens into larger concerns: the persistence of habits, desire, disappointments, the lie of the perfectly preserved, the pleasures of aversions, transformations, and a phenomenon from physics known as the strange attractor.
Barbara Hurd is the author of "Stirring the Mud," "Entering the Stone," and a collection of poetry, "The Singer's Temple." Her work has appeared in "Best American Essays," "Yale Review," "Georgia Review," "Nimrod," "New Letters," and "Audubon." Hurd teaches creative writing at Frostburg State University, where she has held the Elkins Professorship, and at the Stonecoast MFA program at the University of Southern Maine.

"This is a beautiful book. It is as skillfully constructed as a poem, and like a poem its meanings widen. It is a series of fascinating, informative nature essays, but more deeply it is a series of meditations on 'what might be rescued from near-destruction, from silence, from invisibility.' As such, it becomes spiritual autobiography with a great deal to say, though almost always indirectly, about human aging and loss."--Ann Fisher-Wirth, author of Five Terraces

"In the partial and broken objects she gathers, Hurd finds the transcendent. Easily braiding observation and reflection, she is a clear-eyed witness to living gracefully with the wrack and ruin of our human burdens. She is a marvelous writer."--Alison Hawthorne Deming, author of Writing the Sacred Into the Real

"Each sentence is an exploration. Every small thing opens into a universe seen through Hurd's brave and curious lens. Her hunt for minutia is subtly inspired and above all tangible, worldly, real."--Craig Childs, author of The Secret Knowledge of Water

"In this lovely collection of essays, Hurd explores the wrack line and finds strength and fragility in tiny by-the-wind sailors suddenly cast ashore, raw beauty in a moon snail devouring its prey, disintegration and renewal in stone and sand. Belonging to land and sea, the wrack line is evanescent and enduring, broken and seamless. With her insight, in its particulars, we see our own."--Deborah Cramer

"Hurd delivers nineteen pithy and gorgeously written meditations on the places where land and ocean meet. . . . [She] is magnificent at translating the world into words, in witnessing some small incident on a beach . . . and spiraling it out into a sustained series of questions about impermanence."--Anthony Doerr, Boston Globe

"There's scarcely anyone writing better about the natural world than the much-unheralded Barbara Hurd. In . . . Walking the Wrack Line, Hurd turns her spare prose and lyrical powers of observation to shingle beaches, spider crabs, jellyfish, dead sailors, and such landlocked matters as why Franz Schubert never finished his Symphony in B Minor, known as the Unfinished Symphony.--Alan Cheuse, National Public Radio