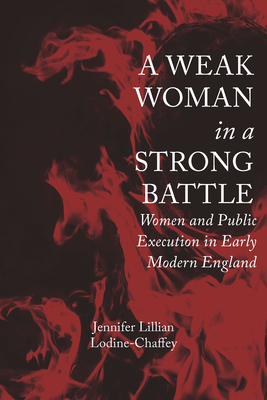 A Weak Woman in a Strong Battle: Women and Public Execution in Early Modern England provides critical insights on representations of women on the scaffold, focusing on how female victims and those writing about them constructed meaning from the ritual. Jennifer Lodine-Chaffey draws on a wide range of genres, from accounts of martyrdom to dramatic works, to explore not only the words of women executed in Tudor and Stuart England, but also the ways that writers represented female bodies as markers of penitence or deviance.

A significant part of the execution spectacle—one used to assess the victim’s proper acceptance of death and godly repentance—was the final speech offered at the foot of the gallows or before the pyre. To ensure their final words held value for audiences, women adopted conventionally gendered language and positioned themselves as subservient and modest. The reception of women’s speeches, Lodine-Chaffey argues, depended on their performances of accepted female behaviors and language as well as physical signs of interior regeneration. Indeed, when women presented themselves or were represented as behaving in stereotypically feminine and virtuous ways, they were able to offer limited critiques of their fraught positions in society.

Just as important as their words, though, were the depictions of women’s bodies. The executed woman’s body, Lodine-Chaffey contends, functioned as a text, scrutinized by witnesses and readers for markers of innocence or guilt. The intense focus on the words and bodies of women facing execution during this period, Lodine-Chaffey argues, became a catalyst for a more thorough interest in and understanding of women’s roles not just as criminals but as subjects
Jennifer Lillian Lodine-Chaffey is assistant professor of English at Southeastern Oklahoma State University. Her peer-reviewed scholarship has appeared in the Ben Jonson Journal, Parergon, Quidditas: Journal of the Rocky Mountain Medieval and Renaissance Association, Marlowe Studies, and Brontë Studies.

“In A Weak Woman in a Strong Battle, Professor Lodine-Chaffey leads readers through the sixteenth- to eighteenth-century’s paradoxical world of women on the scaffold. The book’s many illustrative examples show women who are weak yet divinely empowered. They exhibit culturally endorsed female traits while framing themselves as subjects subverting the theater of death’s ritual. In the gendered execution, they display modesty even as they critique society’s conventions concerning gender roles. And they are often submissive while still establishing limited agency to take partial control of the narratives of their deaths. This study raises the portrayal of women’s executions in such genres as plays, ballads, and poems, with particular attention to the ways in which these events are portrayed in the various genres but with particular attention to newsbooks and pamphlets. Focusing on the role of women’s bodies on the scaffold, where they are transformed into texts to be interpreted, Lodine-Chaffey’s exceptionally well-researched book chronicles the transition of women’s punishments in early modern to eighteenth-century executions.”
—P. J. Klemp, author of The Theatre of Death: Rituals of Justice from the English Civil Wars to the Restoration and senior editor of Milton Quarterly