And I Said No Lord: A Twenty-One-Year-Old in Mississippi in 1964 (Hardcover) 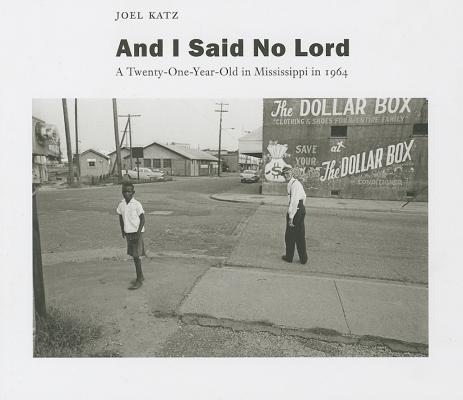 And I Said No Lord: A Twenty-One-Year-Old in Mississippi in 1964 (Hardcover)


Special Order—Subject to Availability
Photographer and writer Joel Katz presents a pictorial chronicle of his travels through the shifting islands of fear and loss, freedom and deliverance that was segregated Mississippi during the Freedom Summer of 1964

In June 1964, college student Joel Katz boarded a Greyhound bus in Hartford, Connecticut, for Jackson, Mississippi. He carried few possessions—a small bag of clothes, a written invitation to call on Frank Barber, who was special assistant to Governor Paul Johnson, and a Honeywell Pentax H1-A camera with three lenses.

A few days after his arrival in Jackson, the city’s Daily News ran on its front page an FBI alert seeking Andrew Goodman, James Chaney, and Michael Schwerner, three field workers from the Congress of Racial Equality (CORE) who’d gone missing while investigating a church burning in Neshoba County. In the uneasy silence of their disappearance, Katz began a seven-week journey across the state. Along the way, he met the people of Mississippi, black and white, of all ages and classes, from the humble to the grand. These Mississippians encouraged or obstructed change in their traditional culture or simply observed the edifice of that culture tremble and fall.

During 1964’s Freedom Summer, Katz met ministers making history and journalists writing it. He photographed Martin Luther King Jr. and James Abernathy, taught at a freedom school, interviewed a leader of the White Citizens Councils, was harassed by Jackson police, and escaped death in Vicksburg. Six weeks after Katz arrived in Mississippi, the FBI found the bodies of Goodman, Chaney, and Schwerner in an earthen dam.

Inspired by the social documentary photographs of Walker Evans and Robert Frank, Katz snapped hauntingly quotidian photos on his Pentax camera. Amid acts of brutal savagery and transcendent courage that transfixed the nation, Katz discovered resilient individuals living quiet lives worthy of witness. And I Said No Lord is a moving and luminous record of Americans in evolution.

Joel Katz is an information designer, photographer, author, and teacher. A Fellow of the American Academy in Rome, he was a winner of the Rome Prize for 2002–2003 and named a Fellow of AIGA Philadelphia in 2002. He lectures widely, both in the United States and in Europe, and teaches information design at The University of the Arts. Katz is the author of Designing Information: Human Factors and Common Sense in Information Design and co-author of Brand Atlas and The Nature of Recreation.

“And I Said No Lord is a remarkable book. It evokes the fear and hope that swirled around Freedom Summer in Mississippi, 1964, as seen by a 21-year old who was probably more courageous than he knew at the time. A door opened in Joel Katz’s world, and with the wonderful brashness of the young he stepped through it. The seismic shift that was taking place in the country then vibrates below the surface of these quiet photographs. They hold within them a tension that continues to this day. It is surprising and wonderful to find this new collection of words and images coming into the light. The book takes readers back to stand on the shifting ground of that historic time and leaves it to them to draw their own sightlines from then to the present. And I Said No Lord brings a deeper resonance and understanding to those who remember the startling rupture at the center of America that summer. For those who were not yet born, Katz’s book will help them grasp what it felt like to be present, to be a witness, and to be changed”
—Sean Kernan, coauthor of The Secret Books and author of Among Trees, and Sean Kernan: Photographs From Prison


“In And I Said No Lord, we venture with twenty-one-year-old Joel Katz (no relation), then a Yale undergraduate, into Mississippi during the fraught summer of 1964. His focus is not the horrific events of that violent season, though they hover always in the background. Rather, with notebook and camera, he sets out on a voyage of comprehension. With his extraordinary capacity for precise observation, he creates portraits from words as well as photographs. His art is respectful, often disturbing, always memorable, but never sentimental. We witness a self-reflective young man’s agonizing education through the contradictions of a culture based on racism, exploitation, and fantasy. This book is at once an utterly original work of social criticism and a compelling probe into one corner of the soul of America.”
—Michael B. Katz, Walter H. Annenberg Professor of History, University of Pennsylvania


“Joel Katz’s searing and stark photographs and poignant prose take us back to another time and place to make something he will not let us forget: 1964’s Freedom Summer and the Jim Crow South still cast in black and white. Katz looks at southern people and the places that mattered to them and captures their very soul. He does so with a rare ability to respect their dignity and integrity, without necessarily endorsing their purposes. And I Said No Lord is highly personal, which also makes it highly pertinent and potent, for it shows how one can find oneself by learning to know others. The genius and beauty of Katz’s book lies not only in what it reveals but also in what it demands. It cuts to the quick of one’s consciousness and conscience about matters of race, power, place, and moral obligation. It makes us see. It is a book, like Walker Evans’s images, that will stay with anyone who dares to seek the truth.”
—Randall M. Miller, author of “Dear Master”: Letters of a Slave Family