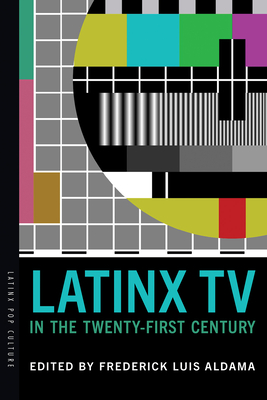 
Backordered
Latinx TV in the Twenty-First Century offers an expansive and critical look at contemporary television by and about U.S. Latinx communities. This volume is comprehensive in its coverage while diving into detailed and specific examples as it navigates the complex and ever-changing world of Latinx representation and creation in television.

In this volume, editor Frederick Luis Aldama brings together leading experts who show how Latinx TV is shaped by historical, social, cultural, regional, and global contexts. Contributors address head on harmful stereotypes in Latinx representation while giving key insights to a positive path forward. TV narratives by and about Latinx people exist across all genres. In this century, we see Latinx people in sitcoms, sci-fi, noir, soap operas, rom-coms, food shows, dramas, action-adventure, and more. Latinx people appear in television across all formats, from quick webisodes, to serialized big-arc narratives, to animation and everything in between. The diverse array of contributors to this volume delve into this rich landscape of Latinx TV from 2000 to today, spanning the ever-widening range of genres and platforms.

Once heavily underrepresented and harmfully stereotypical, Latinx representation on TV is beginning to give careful nuance to regional, communal, and familial experiences among U.S. Latinx people. This volume unpacks the negative implications of older representation and celebrates the progress of new representation, recognizing that television has come a long way, but there is still a lot of important work to do for truly diverse and inclusive representation.

Frederick Luis Aldama is the Jacob & Frances Sanger Mossiker Chair in the Humanities and Affiliate Faculty in the Department of Radio-Television-Film at the University of Texas at Austin, as well as Adjunct Professor and Distinguished University Professor at The Ohio State University. He is the award-winning author of more than forty-eight books and founder and director of UT Austin’s Latinx Pop Lab.

“Comprehensive. Brilliant. Compelling. A masterful, authoritative take on Latinx representation within the TV industrial complex. This book is an essential guide, a must-read, and exactly what the entertainment industry needs!”—Benjamin Lopez, Executive Director NALIP: National Association of Latino Independent Producers

“This volume expansively explores the rich historical—and problematic—presence or lack thereof of Latinx and Brown bodies and their agency in televisual media—María Acosta Cruz, author of Dream Nation: Puerto Rican Culture and the Fictions of Independence