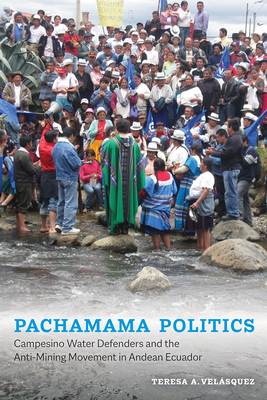 By Teresa A. Velásquez


Not On Our Shelves—Ships in 1-5 Days
Ecuador became the first country in the world to grant the Pachamama, or Mother Earth, constitutional rights in 2008. This landmark achievement represented a shift to incorporate Indigenous philosophies of Sumak Kawsay or Buen Vivir (to live well) as a framework for social and political change. The extraordinary move coincided with the rise of neoextractivism, where the self-described socialist President Rafael Correa contended that Buen Vivir could be achieved through controversial mining projects on Indigenous and campesino territories, including their watersheds.

Pachamama Politics provides a rich ethnographic account of the tensions that follow from neoextractivism in the southern Ecuadorian Andes, where campesinos mobilized to defend their community-managed watershed from a proposed gold mine. Positioned as an activist-scholar, Teresa A. Velásquez takes the reader inside the movement—alongside marches, road blockades, and river and high-altitude wetlands—to expose the rifts between social movements and the “pink tide” government. When the promise of social change turns to state criminalization of water defenders, Velásquez argues that the contradictions of neoextractivism created the political conditions for campesinos to reconsider their relationship to indigeneity.

The book takes an intersectional approach to the study of anti-mining struggles and explains how campesino communities and their allies identified with and redeployed Indigenous cosmologies to defend their water as a life-sustaining entity. Pachamama Politics shows why progressive change requires a shift away from the extractive model of national development to a plurinational defense of community water systems and Indigenous peoples and their autonomy.

Teresa A. Velásquez is an associate professor of anthropology at California State University, San Bernardino

“This is a brilliant ethnography of Indigenous anti-mining movements in Ecuador from an activist-scholar who has spent decades working with social movements and learning from them.”—Nicole Fabricant, author of Mobilizing Bolivia’s Displaced: Indigenous Politics and the Struggle over Land

“The book sheds new light on intersections of gender, race, and class and the new Andean cosmopolitics that has shaped struggles against mining in Correa’s Ecuador. Despite Correa’s invocations of socialism and the rights of Mother Earth, Velásquez shows how Ecuadorans of diverse backgrounds—almost invariably led by women—created a language of unified struggle centered on water and challenged a state that prioritized gold over life.”—Bret Gustafson, author of New Languages of the State: Indigenous Resurgence and the Politics of Knowledge in Bolivia