Legacies of Liberation: The Progressive Catholic Church in Brazil at the Start of a New Millennium (Routledge Revivals) (Hardcover) 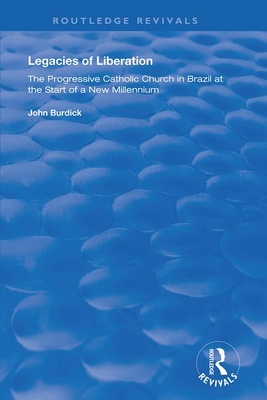 Legacies of Liberation: The Progressive Catholic Church in Brazil at the Start of a New Millennium (Routledge Revivals) (Hardcover)

Originally published in 2004. In Brazil the liberationist reading of the Bible was once supposed to be an unstoppable force for social change, yet many observers now say that in the era of neo-liberalism the liberationist project may be counted all but dead. In Legacies of Liberation, John Burdick offers a bold new interpretation of the state of the Catholic liberationism. Challenging the claim that it is dead, Burdick carefully builds the case that it continues to exert a major influence on Brazilian society and culture, through its penetration of a broad range of grassroots struggles, especially those having to do with race, gender, and land. Burdick brings to bear on his analysis an understanding of Brazil rooted in twenty years of fieldwork, and a perspective shaped by anthropology, theology and history.