Understanding Humor in Japan (Humor in Life and Letters) (Paperback) 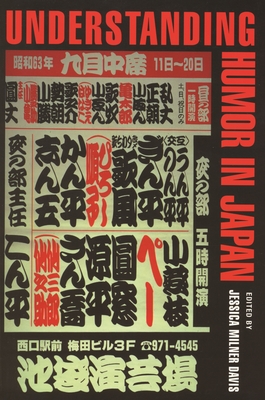 Understanding Humor in Japan (Humor in Life and Letters) (Paperback)

Japanese conventions about comedy and laughter are largely unanalyzed. For many students of Japanese culture and visitors to Japan, Japanese humor seems obscure, incomprehensible, paradoxical, and even nonexistent. By bringing together scholarly insights and original research by both Japanese and non-Japanese experts, Jessica Milner Davis bridges the differences between humor in Japan and the West and examines the entire spectrum of Japanese humor, from ancient traditions and surviving rituals of laughter to norms of joke-telling in ordinary conversation in Japan and America.

For anyone interested in Japan, Japanese culture, and humor studies, Understanding Humor in Japan is an important teaching tool. It provides accessible, illustrative examples of humor in both Japanese and English with explanations of their meaning and cultural significance. Scholarly yet readable, these essays offer intelligent discussion on such topics as the Japanese delight in wordplay, the comic content of Japanese newspapers, the role of film and television in developing Japanese stand-up comedy, and formal censorship and its impact on humorous writing and self-expression in Japan. Understanding Humor in Japan breaks new ground in the study of humor and sheds light on much that is taken for granted about the role of laughter in civilized societies.

Jessica Milner Davis is an honorary visiting fellow in the Department of Arts and Social Sciences at the University of New South Wales in Sydney, Australia.