Apocalypse Man: The Death Drive and the Rhetoric of White Masculine Victimhood (Paperback) 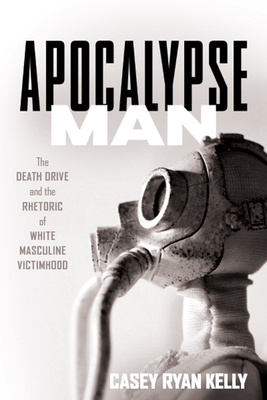 Apocalypse Man: The Death Drive and the Rhetoric of White Masculine Victimhood (Paperback)


Not On Our Shelves—Ships in 1-5 Days
(This book cannot be returned.)
Exemplified by President Donald J. Trump’s slogan “Make American Great Again,” white masculinity has become increasingly organized around melancholic attachments to an imagined past when white men were still atop the social hierarchy. How and why are white men increasingly identifying as victims of social, economic, and political change? Casey Ryan Kelly’s Apocalypse Man seeks to answer this question by examining textual and performative examples of white male rhetoric—as found among online misogynist and incel communities, survivalists and “doomsday preppers,” gender-motivated mass shooters, gun activists, and political demagogues. Using sources ranging from reality television and Reddit manifestos to gun culture and political rallies, Kelly ultimately argues that death, victimhood, and fatalism have come to underwrite the constitution of contemporary white masculinity.
Casey Ryan Kelly is Associate Professor at the University of Nebraska–Lincoln, the author of Abstinence Cinema: Virginity and the Rhetoric of Sexual Purity in Contemporary Film, and the recipient of numerous awards from the National Communication Association.
“That Kelly is able to cover so much ground in this book and so concisely and accessibly describe an array of men's rights groups is no small feat. … His work simultaneously provides a basis for research into rhetorics of white masculinity, men’s rights groups, and hegemonic subjects that claim victimhood. More importantly, it is of use to both academic and non-academic audiences, and accessible to scholars from almost any field.” —Evin Groundwater, Quarterly Journal of Speech

“Apocalypse Man is an ambitious, disturbing, and ultimately necessary project that helps us make sense of our current, popular, political moment!” —Joshua Gunn

​“Casey Kelly has produced a book that not only offers an important critique of mediated rhetorics of white male victimization (and white male supremacy) but also generates nuanced theoretical accounts of the relationship between particular forms of mediation and the intersecting ideologies of race and gender that they articulate. I am excited to use this book in my own scholarship and teaching.” —Claire Sisco King