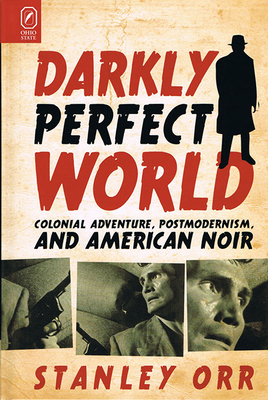 
Special Order—Subject to Availability
Stanley Orr’s Darkly Perfect World offers a large-scale historical narrative about the way American crime fiction and film have changed throughout the twentieth century. Orr argues that films noirs and noir fictions dramatize Raymond Chandler’s pronouncement that “Even in death, a man has a right to his own identity.” Orr illuminates a noir ethos committed to “authenticating alienation”: subjectivity managed through radical polarization of Self and Other. Distinguishing a heretofore unrecognized context for American noir, Orr demonstrates that Chandler and Dashiell Hammett arrive at this subject within and against the colonial adventure genre. While the renegades of Joseph Conrad and Louis Becke project a figure vulnerable to shifts in cultural context, the noir protagonist exemplifies alienated selfhood and often performs a “continental operation” against the slippages of the colonial adventurer. But even as Orson Welles, Billy Wilder, and other noir virtuosi persist with this revision of late Victorian adventure, Chester Himes, Dorothy Hughes, and John Okada experiment with hard-boiled alienation for a subversion of noir that resonates throughout literary postmodernism. In their respective avant-garde novels, Thomas Pynchon, Ishmael Reed, and Paul Auster expose what K.W. Jeter terms the “darkly perfect world” of noir, thus giving rise to and enabling the con men and “connected guys” of contemporary films noirs such as Bryan Singer’s The Usual Suspects, David Fincher’s Seven, Christopher Nolan’s Memento, and Quentin Tarantino’s Reservoir Dogs.
Stanley Orr is professor of English at the University of Hawai‘i, West O‘ahu.
“Darkly Perfect World is an accomplished, engaging, and stimulating book. It offers an ambitious and in some ways quite original argument about an important strain of literary and cultural history. It will make a successful contribution to the fields of noir studies as well as postcolonial studies.” —Sean McCann, professor of English, Wesleyan University

“Stanley Orr gives us a ripping yarn of the hard-boiled detective's emergence from late imperial adventure, and backs it up with sterling scholarship. This book earns its authority with a towering command of primary materials, which it judiciously synthesizes and sharply theorizes. It is a book such as we rarely see. Darkly Perfect World is not just another set of smart opinions about the noir canon, rehashing the usual suspects, but a new perspective gained by reading what no one else has bothered to, and making it relevant.” —Martin Kevorkian, associate professor of English, The University of Texas at Austin