By Broad Potomac's Shore: Great Poems from the Early Days of Our Nation's Capital (Paperback) 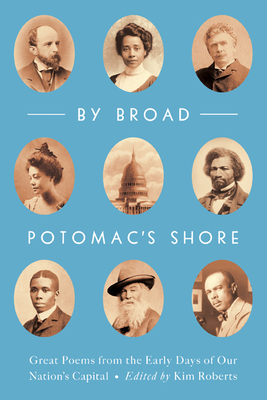 By Broad Potomac's Shore: Great Poems from the Early Days of Our Nation's Capital (Paperback)

Following her successful Literary Guide to Washington, DC, which Library Journal called "the perfect accompaniment for a literature-inspired vacation in the US capital," Kim Roberts returns with a comprehensive anthology of poems by both well-known and overlooked poets working and living in the capital from the city's founding in 1800 to 1930. Roberts expertly presents the work of 132 poets, including poems by celebrated DC writers such as Francis Scott Key, Walt Whitman, Frederick Douglass, Paul Laurence Dunbar, Ambrose Bierce, Henry Adams, and James Weldon Johnson, as well as the work of lesser-known poets--especially women, writers of color, and working-class writers. A significant number of the poems are by writers who were born enslaved, such as Fanny Jackson Coppin, T. Thomas Fortune, and John Sella Martin.

The book is arranged thematically, representing the poetic work happening in our nation's capital from its founding through the Civil War, Reconstruction, World War I, and the beginnings of literary modernism. The city has always been home to prominent poets--including presidents and congressmen, lawyers and Supreme Court judges, foreign diplomats, US poets laureate, professors, and inventors--as well as writers from across the country who came to Washington as correspondents. A broad range of voices is represented in this incomparable volume.

Kim Roberts is a freelance literary historian, writer, and editor living in Washington, DC, and the author of A Literary Guide to Washington, DC