City of Trees: The Complete Field Guide to the Trees of Washington, D.C. (Center Books) (Paperback) 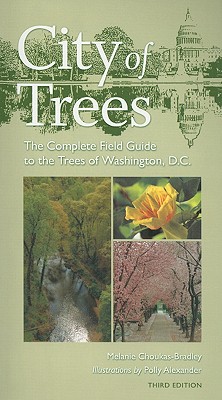 City of Trees: The Complete Field Guide to the Trees of Washington, D.C. (Center Books) (Paperback)

Washington, D.C., boasts more than three hundred species of trees from America, Europe, Africa, and Asia, and City of Trees has been the authoritative guide for locating, identifying, and learning about them for more than twenty-five years. The third edition is fully revised, updated, and expanded and includes an eloquent new foreword by the Washington Post's garden editor, Adrian Higgins.

In the introduction, Choukas-Bradley describes the efforts of George Washington, Thomas Jefferson, and other prominent Washingtonians who helped the nation's capital evolve into the "City of Trees," a moniker regaining popularity thanks to present-day efforts encouraging citizen participation in tree planting and maintenance.

Part 1 gives the reader a guided tour of the nation's capital, highlighting historic and rare trees of the urban canopy. Part 2 is a comprehensive, simply worded, and fully illustrated botanical guide to the magnificent trees of the nation's capital and surroundings. The guide also includes botanical keys, an illustrated glossary, exquisite pen-and-ink drawings by Polly Alexander, and color close-up photographs of flowering trees, many by the nationally acclaimed photographer Susan A. Roth.

What to look for in the new edition:

* "City of Trees" history from 1987 to 2007, including the establishment of Casey Trees and the importance of the urban canopy in the twenty-first century.

* Twice as many pages of color photographs, new species descriptions and illustrations, and added habitat information.

Published in association with the Center for American Places

Melanie Choukas-Bradley is the author of Sugarloaf: The Mountain's History, Geology, and Natural Lore (Virginia) and An Illustrated Guide to Eastern Woodland Wildflowers and Trees (Virginia). She is a long-time contributor to the Washington Post, a field botany instructor for the USDA Graduate School, and a field trip leader for the Audubon Naturalist Society. Polly Alexander lives in Essex Junction, Vermont, with her husband and son. Since City of Trees was first published in 1981, she has worked at an advertising agency, owned a graphic design firm, and illustrated numerous books and articles.