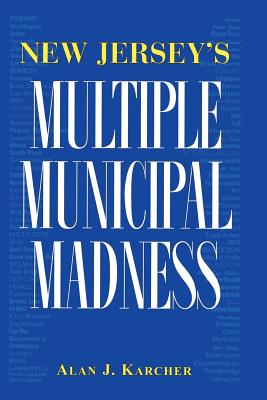 
Not On Our Shelves—Ships in 1-5 Days
A critical look at how and why the boundary lines of New Jersey's 566 municipalities were drawn, pointing to the irrationality of these excessive divisions.

Alan Karcher looks at the history and high cost of New Jersey's multiple municipalities. He investigates the economic considerations, political pressures, and personal agendas that created the bizarre configurations dividing the Garden State, while analyzing the public policies that allowed and even encouraged the formation of new municipalities. Karcher also examines the political dynamics that thwarted every effort of New Jersey metropolises to join the front ranks of major American cities.

Karcher identifies the major motivations behind the unparalleled experience of New Jersey's municipal multiplication. He delves deeply into the primary causes of new lines being drawn, such as road appropriations, the location of a railroad station, control of a local school district, the regulation of alcohol sales, and the preservation of exclusivity prior to the acceptance of zoning. He also assesses the present situation and what has happened in the past 60 years since the municipal multiplication madness ceased, calling on elected officials to confront reality and correct yesterday's excesses.

The genesis of the present political map of the state is a story that while interesting is not always charming, while fascinating is far from edifying. Little in the history can be called quaint. Rather it is a story of separation and exclusion, of division and greed, of preservation of prerogatives and prejudices. It is a story that supports the conclusion that these lines are rarely the product of chance, rather they were drawn by politicians with very human foibles and frailties, and with very narrow agendas-agendas that have proven to be egregiously expensive for today's taxpayers.