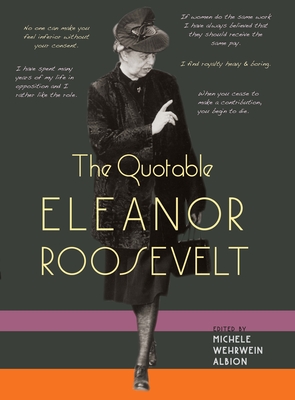 
On Our Shelves Now at:
"Clearly the definitive book of Eleanor Roosevelt quotes. Albion does excellent work weeding out all the apocryphal quotes so often attributed to Eleanor Roosevelt, giving us only the real thing."--Christy Regenhardt, associate editor of The Eleanor Roosevelt Papers, Volume 2 "Eleanor Roosevelt remains a compelling and interesting person, and these quotes give her greater voice."--Kenneth Bindas, author of Remembering the Great Depression in the Rural South Born in the late 1800s to one of the wealthiest families in New York City, Eleanor Roosevelt seemed destined for a traditional woman's role within a sedate Victorian life. Instead, she married her fifth cousin and was flung into the highest levels of American politics, culminating in Franklin's unprecedented four-term presidency. While previous first ladies refrained from public discussion of their personal views, Eleanor's bold opinions on political, social, and racial issues took many by surprise. She held press conferences and wrote a syndicated column. She spoke at national conventions, granted interviews, and often made appearances on her husband's behalf. Her own influence lasted years beyond his death. She advocated for human rights, worked with the United Nations, and supported what later became the civil rights movement. The fascinating quotes in this collection are the words of an articulate, honest, and thoughtful woman. Of war, she said, "I hope the day will come when all that inventing and mechanical genius will be used for other purposes." At a time when racism prevailed, Eleanor said, "We must be proud of every one of our citizens, for regardless of nationality, or race, every one contributes to the welfare and culture of the nation." Organized by topic--government, money, art, education, class, relationships, emotions--these quotations reveal the personal thoughts Roosevelt shared in letters and conversations alongside the strong opinions she expressed in speeches and interviews, giving evidence to her character and her beliefs. Her words continue to resonate today.
Michele Wehrwein Albion is a writer based in New Hampshire. She is the author of The Florida Life of Thomas Edison and the editor of The Quotable Edison and The Quotable Henry Ford.