Bay of Pigs: An Oral History of Brigade 2506 (Paperback) 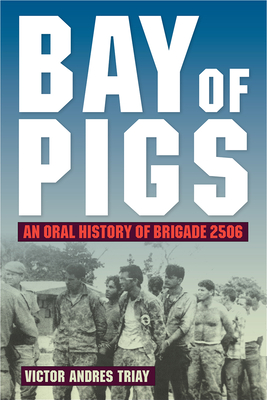 Bay of Pigs: An Oral History of Brigade 2506 (Paperback)


Not On Our Shelves—Ships in 1-5 Days
From the interviews:

"My pregnant] wife once asked me, 'How is it possible you are not thinking of your child?' I told her, 'It is precisely because of that child and the two others I have here that I am going. I plan to return to my fatherland, and I don't want a Communist homeland.'"-- Jorge Marquet

"One of the sad things that has happened over this period in the history of Cuba is that historians have not given credit to the idealism of those who turned against the revolution. We were really full of good will and wanted to make Cuba better."--Eduardo Zayas-Baz n

" A] feeling of duty to defend our faith was what motivated my husband . . . . What made me give my blessing to his activities were my own feelings of duty."-- Myrna Pardo Mill n (widowed by the invasion)

This is the story of the Bay of Pigs invasion, told for the first time in the words of the idealistic participants who came together in April 1961 to overthrow Fidel Castro's dictatorship. Most of the approximately 1,500 men of Brigade 2506 were captured by Castro's forces in Cuban swamps and jailed until December 1962. About 114 died.

Combining oral history and traditional narrative form, Victor Triay tells us who individual members of the brigade were and what they fought for. As one veteran, only eighteen at the time of the invasion, recalls, "It was my turn to do something for Cuba. Probably the purest thing I have ever done in my life was to make the decision to go." Triay describes the volunteers' recruitment, training, combat experience, and the wretched months of their imprisonment. He also presents the women they left behind, including three who were widowed by the invasion.

Among the nearly 2 million people in the U.S. Cuban community today, the freedom fighters who made up Brigade 2506 have always been accorded the highest level of respect. Bay of Pigs tells the personal stories of the invasion in an account that restores the human dimension to a pivotal moment in the history of the Cold War.

Victor Andres Triay, associate professor of history at Middlesex Community College in Middletown, Connecticut, is the author of Fleeing Castro: Operation Pedro Pan and the Cuban Children's Program. Triay, whose parents left Cuba in 1960, grew up in Miami, Florida. His essays and short stories have appeared in New to North America: Writings by Immigrants, Their Children, and Grandchildren and in other anthologies.