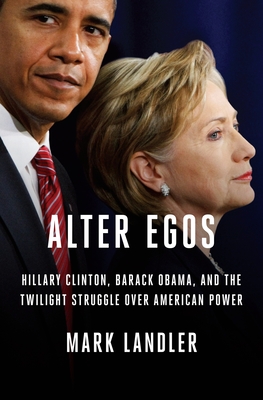 
Special Order—Subject to Availability
“An inside account of Hillary Clinton’s relationship with Barack Obama that brims with insight and high-level intrigue.”—Jane Mayer, bestselling author of Dark Money

In the annals of American statecraft, theirs was a most unlikely alliance. Clinton, daughter of an anticommunist father, was raised in the Republican suburbs of Chicago in the aftermath of World War II, nourishing an unshakable belief in the United States as a force for good in distant lands. Obama, an itinerant child of the 1970s, was raised by a single mother in Indonesia and Hawaii, suspended between worlds and a witness to the less savory side of Uncle Sam’s influence abroad. Clinton and Obama would later come to embody competing visions of America’s role in the world: his, restrained, inward-looking, painfully aware of limits; hers, hard-edged, pragmatic, unabashedly old-fashioned.

Spanning the arc of Obama’s two terms, Alter Egos goes beyond the speeches and press conferences to the Oval Office huddles and South Lawn strolls, where Obama and Clinton pressed their views. It follows their evolution from bitter rivals to wary partners, and then to something resembling rivals again, as Clinton defined herself anew and distanced herself from her old boss. In the process, it counters the narrative that, during her years as secretary of state, there was no daylight between them, that the wounds of the 2008 campaign had been entirely healed.

The president and his chief diplomat parted company over some of the biggest issues of the day: how quickly to wind down the wars in Iraq and Afghanistan; whether to arm the rebels in Syria; how to respond to the upheaval in Egypt; and whether to trust the Russians. In Landler’s gripping account, we venture inside the Situation Room during the raid on Osama bin Laden’s compound, watch Obama and Clinton work in tandem to salvage a conference on climate change in Copenhagen, and uncover the secret history of their nuclear diplomacy with Iran—a story with a host of fresh disclosures.

With the grand sweep of history and the pointillist detail of an account based on insider access—the book draws on exclusive interviews with more than one hundred senior administration officials, foreign diplomats, and friends of Obama and Clinton—Mark Landler offers the definitive account of a complex, profoundly important relationship.
Mark Landler has covered American foreign policy for The New York Times since the inauguration of Barack Obama, first as diplomatic correspondent and since 2011 as White House correspondent. In twenty-four years at the Times, Landler has been the newspaper’s bureau chief in Hong Kong and Frankfurt, European economic correspondent, and a business reporter in New York. He lives with his family in Chevy Chase, Maryland.
“A superb journalist has brought us a vivid, page-turning, and revelatory account of the relationship between Barack Obama and Hillary Clinton, as well as of their statecraft.”—Michael Beschloss, bestselling author of Presidential Courage

“Mark Landler, one of the best reporters working in Washington today, delivers an inside account of Hillary Clinton’s relationship with Barack Obama that brims with insight and high-level intrigue. It’s both fun to read and eye-opening.”—Jane Mayer, bestselling author of Dark Money: The Hidden History of the Billionaires Behind the Rise of the Radical Right

“An incredibly important book, timely and deeply revelatory. Landler’s brilliant reporting reveals a Barack Obama ever skeptical of establishment wisdom, and a Hillary Clinton driven by ‘inner hawk’ instincts. This is an extraordinary tale of two formidable personalities locked in an alliance who have competing visions of America’s foreign policy.”—Kai Bird, Pulitzer Prize–winning author of The Good Spy: The Life and Death of Robert Ames