The Death of Conservatism: A Movement and Its Consequences (Paperback) 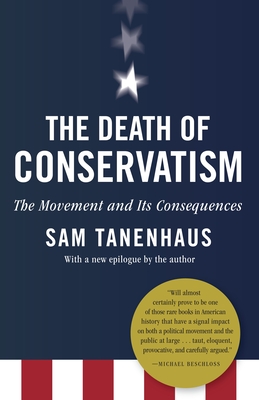 The Death of Conservatism: A Movement and Its Consequences (Paperback)

Special Order—Subject to Availability
Sam Tanenhaus’s essay “Conservatism Is Dead” prompted intense discussion and debate when it was published in The New Republic in the first days of Barack Obama’s presidency. Now Tanenhaus, a leading authority on modern politics, has expanded his argument into a sweeping history of the American conservative movement. For seventy-five years, he argues, the Right has been split between two factions: consensus-driven “realists” who believe in the virtue of government and its power to adjust to changing conditions, and movement “revanchists” who distrust government and society–and often find themselves at war with America itself.

Eventually, Tanenhaus writes, the revanchists prevailed, and the result is the decadent “movement conservatism” of today, a defunct ideology that is “profoundly and defiantly unconservative–in its arguments and ideas, its tactics and strategies, above all in its vision.”

But there is hope for conservatism. It resides in the examples of pragmatic leaders like Dwight Eisenhower and Ronald Reagan and thinkers like Whittaker Chambers and William F. Buckley, Jr. Each came to understand that the true role of conservatism is not to advance a narrow ideological agenda but to engage in a serious dialogue with liberalism and join with it in upholding “the politics of stability.”

Conservatives today need to rediscover the roots of this honorable tradition. It is their only route back to the center of American politics.
At once succinct and detailed, penetrating and nuanced, The Death of Conservatism is a must-read for Americans of any political persuasion.
Sam Tanenhaus is the editor of both The New York Times Book Review and the Week in Review section of the Times. From 1999 to 2004 he was a contributing editor at Vanity Fair, where he wrote often on politics. His work has also appeared in The New York Times Magazine, The New Republic, The New York Review of Books, and many other publications. Tanenhaus’s previous book, Whittaker Chambers: A Biography, won the Los Angeles Times Book Prize and was a finalist for both the National Book Award and the Pulitzer Prize.

“Impeccably well-written book insightfully summarizes the highs and lows of American conservatism over the decades.”—Publishers Weekly