Spies of the Balkans: A Novel (Paperback) 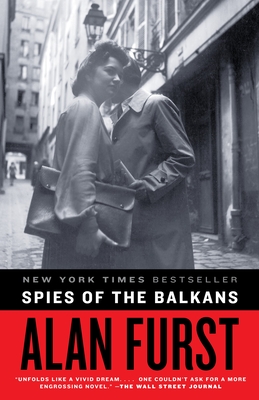 Spies of the Balkans: A Novel (Paperback)

Greece, 1940. In the port city of Salonika, with its wharves and brothels, dark alleys and Turkish mansions, a tense political drama is being played out. As Adolf Hitler plans to invade the Balkans, spies begin to circle—and Costa Zannis, a senior police official, must deal with them all. He is soon in the game, working to secure an escape route for fugitives from Nazi Berlin that is protected by German lawyers, Balkan detectives, and Hungarian gangsters—and hunted by the Gestapo. Meanwhile, as war threatens, the erotic life of the city grows passionate. For Zannis, that means a British expatriate who owns the local ballet academy, a woman from the dark side of Salonika society, and the wife of a shipping magnate. With extraordinary historical detail and a superb cast of characters, Spies of the Balkans is a stunning novel about a man who risks everything to fight back against the world’s evil.

Alan Furst is widely recognized as the master of the historical spy novel. Now translated into seventeen languages, he is the bestselling author of Night Soldiers, Dark Star, The Polish Officer, The World at Night, Red Gold, Kingdom of Shadows, Blood of Victory, Dark Voyage, and The Foreign Correspondent Born in New York, he now lives in Paris and on Long Island.
“Unfolds like a vivid dream . . . One couldn’t ask for a more engrossing novel.”—The Wall Street Journal

NAMED ONE OF THE BEST BOOKS OF THE YEAR BY
Los Angeles Times • The Seattle Times • St. Louis Post-Dispatch
Milwaukee Journal Sentinel • The Globe and Mail