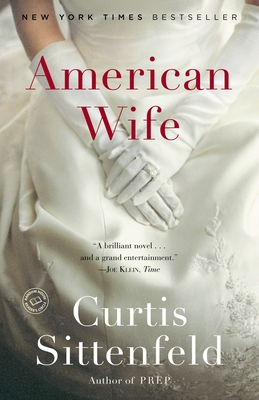 “The reader will recognize the main characters, Alice and Charlie, as they experience their tempestuous courtship and marriage, and their rise to political fame and fortune. Although the setting is Wisconsin, the protagonists bear a curious resemblance to a couple from Texas who achieved the highest office of the land. This story, told from the perspective of a fictional First Lady, is hard to put down!”
— Marilyn Sieb, Books & Company, Oconomowoc, WI

NEW YORK TIMES BESTSELLER • A gorgeously written novel that weaves class, wealth, race, and fate into a brilliant portrait of a first lady—from the author of Rodham and Eligible

NAMED ONE OF THE TEN BEST BOOKS OF THE YEAR: Time • People • Entertainment Weekly

A kind, bookish only child born in the 1940s, Alice Lindgren has no idea that she will one day end up in the White House, married to the president. In her small Wisconsin hometown she learns the virtues of politeness, but a tragic accident when she is seventeen shatters her identity and changes the trajectory of her life. More than a decade later, when the charismatic son of a powerful Republican family sweeps her off her feet, she is surprised to find herself admitted into a world of privilege.

And when her husband unexpectedly becomes governor and then president, she discovers that she is married to a man she both loves and fundamentally disagrees with—and that her private beliefs increasingly run against her public persona. As her husband’s presidency enters its second term, Alice must confront contradictions years in the making and face questions nearly impossible to answer.

NAMED ONE OF THE BEST BOOKS OF THE YEAR: The New York Times Book Review • Chicago Tribune • NPR • Rocky Mountain News • St. Louis Post-Dispatch • The Washington Post Book World
Curtis Sittenfeld is the New York Times bestselling author of the novels Prep, The Man of My Dreams, American Wife, Sisterland, and Eligible, and the story collection You Think It, I’ll Say It, which have been translated into thirty languages. Her short stories have appeared in The New Yorker, The Washington Post Magazine, Esquire, and The Best American Short Stories, of which she was the 2020 guest editor. Her nonfiction has appeared in The New York Times, The Atlantic, Time, and Vanity Fair, and on public radio’s This American Life.
“A brilliant novel . . . and a grand entertainment.”—Joe Klein, Time

“An intimate and daring story . . . Alice is a woman of considerable intellect, compassion and character.”—USA Today

“Curtis Sittenfeld is an amazing writer, and American Wife is a brave and moving novel about the intersection of private and public life in America. Ambitious and humble at the same time, Sittenfeld refuses to trivialize or simplify people, whether real or imagined.”—Richard Russo

“Sittenfeld installs herself deep within the psyche of the tight-lipped wife of the president and emerges with an evenhanded, compassionate look at her mind and heart. . . . Powerfully intimate. Grade: A.”—The Washington Post Book World

“A well-researched book that imagines what lies behind that placid facade of the first lady . . . Ms. Sittenfeld was not out to sensationalize but sympathize. The portraits of Laura and W.—known as Alice and Charlie Blackwell here—are trenchant and make you like them more.”—Maureen Dowd, The New York Times

“A gripping epic of public and private lives. A gem.”—Good Housekeeping

“American Wife reveals how difficult it can be, living this American life with its dreams of power and prosperity, to be true to yourself. . . . Sittenfeld hits all the hot spots: daughterhood, sex, money, career, marriage, motherhood. . . . Alice’s life has something in it for every American female.”—Los Angeles Times

“Showing that she’s grown immensely even since her bestselling debut, Sittenfeld now claims her spot as one of a new generation’s greatest novelists.”—BUST

“[Sittenfeld] writes in the sharp, realistic tradition of Philip Roth and Richard Ford—clear, unpretentious prose; metaphors so spot-on you barely notice them. Sittenfeld may have lifted the set pieces from a real woman’s life, but in the process she has created a wise and insightful character who is entirely her own.”—Time Out New York

“The novel is a gift, a sweeping exploration of a woman’s odyssey from obscurity to fame and the painful decisions she must make along the way.”—The Miami Herald

“We love Sittenfeld. We love her wry, razor-sharp observations. We love her funny, straightforward honesty. . . . An empathetic, fascinating, and gorgeously written story about a thirty-year marriage. We devoured it in one night.”—Boston magazine

“If you’ve ever wondered, while watching President Bush cavorting through the minefields of foreign policy and public opinion, ‘What must Laura be thinking?’ novelist Curtis Sittenfeld has written the book for you.”—The Dallas Morning News