The Artist's Garden: American Impressionism and the Garden Movement (Hardcover) 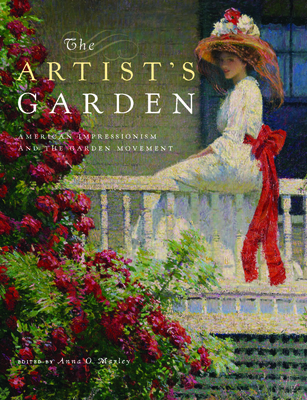 The Artist's Garden: American Impressionism and the Garden Movement (Hardcover)

Inspired by European impressionist paintings of open countryside, private gardens, and urban parks, American artists working in the years between 1887 and 1920 turned their attentions to the new landscapes being created in the fast-changing cities and rapidly emerging suburbs of their own country. Up and down the eastern seaboard, a middle-class idyll was brought to life with the construction of railways, trams, and parkways that connected city centers to commuter suburbs, whose inhabitants increasingly turned to gardening as a leisure--and predominantly female--pursuit. The two arts of painting and garden design are closely related, landscape architect Beatrix Farrand wrote in 1907, except that the landscape gardener paints with actual color, line, and perspective to make a composition . . . while the painter has but a flat surface on which to create his illusion.

The Artist's Garden tells the intertwined stories of American art and the new American garden movement in the years on either side of the turn of the twentieth century. Anna O. Marley and her contributors showcase more than one hundred beautifully reproduced artworks by Cecilia Beaux, Mary Cassatt, William Merritt Chase, Childe Hassam, and others alongside the books, journals, and ephemeral artifacts that both shaped and were products of the garden movement. The volume's lavishly illustrated text considers topics that range from environmentalism to new printing technologies, from the genres of garden writing to the distinctions between public and domestic spaces or American and French impressionism. Employing the interdisciplinary perspectives of horticultural and art history, The Artist's Garden places special emphasis on the mid-Atlantic region as the epicenter of a national garden movement and offers a new look into the impact of impressionism not on American painting alone, but on the nation's culture at large. Contributors: Alan C. Braddock, James Glisson, John Dixon Hunt, Erin Leary, Anna O. Marley, Katie A. Pfohl, Judith B. Tankard, Virginia Grace Tuttle.
Anna O. Marley is Curator of Historical American Art at the Pennsylvania Academy of the Fine Arts and editor of Henry Ossawa Tanner: Modern Spirit.