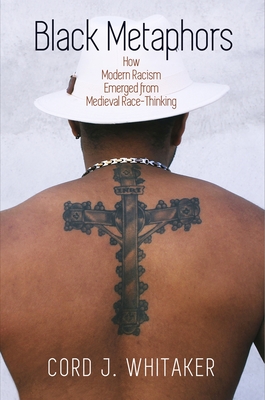 In the late Middle Ages, Christian conversion could wash a black person's skin white--or at least that is what happens when a black sultan converts to Christianity in the English romance King of Tars. In Black Metaphors, Cord J. Whitaker examines the rhetorical and theological moves through which blackness and whiteness became metaphors for sin and purity in the English and European Middle Ages--metaphors that guided the development of notions of race in the centuries that followed. From a modern perspective, moments like the sultan's transformation present blackness and whiteness as opposites in which each condition is forever marked as a negative or positive attribute; medieval readers were instead encouraged to remember that things that are ostensibly and strikingly different are not so separate after all, but mutually construct one another. Indeed, Whitaker observes, for medieval scholars and writers, blackness and whiteness, and the sin and salvation they represent, were held in tension, forming a unified whole.

Whitaker asks not so much whether race mattered to the Middle Ages as how the Middle Ages matters to the study of race in our fraught times. Looking to the treatment of color and difference in works of rhetoric such as John of Garland's Synonyma, as well as in a range of vernacular theological and imaginative texts, including Robert Manning's Handlyng Synne, and such lesser known romances as The Turke and Sir Gawain, he illuminates the process by which one interpretation among many became established as the truth, and demonstrates how modern movements--from Black Lives Matter to the alt-right--are animated by the medieval origins of the black-white divide.
Cord J. Whitaker is Associate Professor of English at Wellesley College.