Tell Them of Battles, Kings, and Elephants (Paperback) 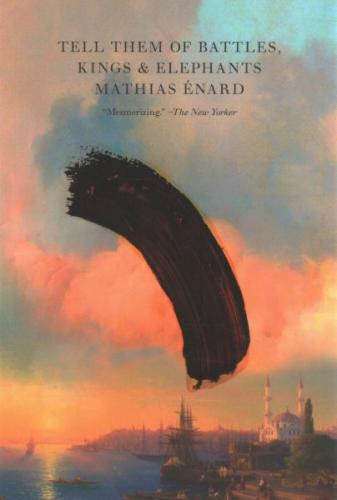 Tell Them of Battles, Kings, and Elephants (Paperback)

Michelangelo’s adventure in Constantinople, from the “mesmerizing” (New Yorker) and “masterful” (Washington Post) author of Compass

In 1506, Michelangelo—a young but already renowned sculptor—is invited by the sultan of Constantinople to design a bridge over the Golden Horn. The sultan has offered, along with an enormous payment, the promise of immortality, since Leonardo da Vinci’s design was rejected: “You will surpass him in glory if you accept, for you will succeed where he has failed, and you will give the world a monument without equal.” Michelangelo, after some hesitation, flees Rome and an irritated Pope Julius II—whose commission he leaves unfinished—and arrives in Constantinople for this truly epic project. Once there, he explores the beauty and wonder of the Ottoman Empire, sketching and describing his impressions along the way, as he struggles to create what could be his greatest architectural masterwork.

Tell Them of Battles, Kings, and Elephants—constructed from real historical fragments—is a thrilling page-turner about why stories are told, why bridges are built, and how seemingly unmatched fragments, seen from the opposite sides of civilization, can mirror one another.

Mathias Énard is the author of Compass (winner of the Prix Goncourt, the Leipzig Prize, and the Premio von Rezzori, and shortlisted for the 2017 Man Booker International Prize), Zone, and Street of Thieves.

Charlotte Mandell has translated works by a number of important French authors, including Proust, Flaubert, Genet, Maupassant, and Blanchot.
All of Énard's books share the hope of transposing prose into the empyrean of pure sound, where words can never correspond to stable meanings. He's the composer of a discomposing age.
— Joshua Cohen - New York Times Book Review

Énard weaves an imaginative and suspenseful tale of civilizations and personalities clashing, of love, of being an artist in a violent era.
— Juan Vidal - NPR

There is a lush materiality to Énard’s prose, thick and smooth, so that following the artist’s expeditions through Ottoman opium dens feels nearly as immersive as being in them.
— The New York Times

Tell Them of Battles, Kings, and Elephants (deftly translated, like Énard’s three previous English releases, by Charlotte Mandell) is a tale of bastard genius that might have been, and a cautionary fable about the consequences of parochial timidity.