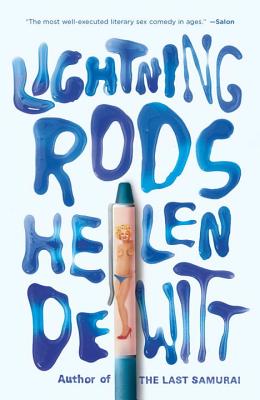 “Joe, an out of work encyclopedia salesman, has a lot of ideas. Most are useless, but he stumbles upon a solution to the problem of sexual harassment and low productivity in the workplace. His unconventional idea is an immediate hit for corporate offices, but Joe is then forced to take on the stigma of being very successful at something that is revolting to most. Reminiscent of the writings of both Shteyngart and Palahniuk, Lightning Rods avoids pretention by being bizarrely funny and satisfyingly sardonic.”
— Rachel Haisley, The King's English, Salt Lake City, UT

From the acclaimed author of The Last Samurai, Lightning Rods is "the most well-executed literary sex comedy" of our time.

Described as “the most well-executed literary sex comedy” of our time by Salon.com, and “a wickedly smart satire that deserves to be a classic” by Bookforum, Helen DeWitt’s Lighting Rods is a novel that will leave you laughing for more. Follow one steady rise to power in corporate America as down-and-out salesman Joe curtails sexual harassment in the office and increases productivity with his mysterious, mind-blowing invention.

Helen DeWitt was born in a suburb of Washington, DC. Daughter of American diplomats, she grew up mainly in Latin America, living in Mexico, Brazil, Colombia, and Ecuador. She went to Oxford to study classics for a BA and D.Phil. She left academia to try to write a novel, moving eventually to London and acquiring UK citizenship. She had some 100 fragments of novels when she began work in 1995 on the novel that was published as The Last Samurai in 2000. The book caused a sensation at the Frankfurt Bookfair 1999, going on to be translated in 20 languages (DeWitt reads some 15 languages to various degrees of fluency). On the reissue of The Last Samurai by New Directions in 2016 it was hailed by Vulture Magazine as The Best Book of the Century. She is also the author of Lightning Rods, a Mel Brooksian satire on sexual harassment, and Some Trick, a collection of stories. She has been based in Berlin since 2004, but also spends time at a cottage in the woods of Vermont improving her chainsaw skills.
A tightly disciplined and extremely funny satire on office politics, sexual politics, American politics, and the art of positive thinking.
— The Guardian

An absurdist comedy of the American workplace and the indignities faced by employees in today's turbo-capitalism, a quietly seething feminist critique of pornography and the commodification of women, and a category-defying fable about the meaninglessness of success.
— Telegraph