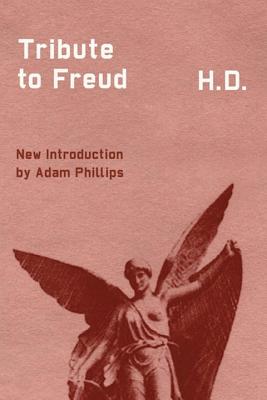 A classic of American literature, now with a new introduction by iconic author and psychotherapist Adam Phillips.

“My bat-like thought-wings would beat painfully in that sudden searchlight,” H.D. writes in Tribute to Freud, her moving memoir. Compelled by historical as well as personal crises, H.D. underwent therapy with Freud during 1933–34, as the streets of Vienna were littered with tokens dropped like confetti on the city stating “Hitler gives work,” “Hitler gives bread.” Having endured World War I, she was now gathering her resources to face the cataclysm she knew was approaching. The first part of the book, “Writing on the Wall,” was composed some ten years after H.D.’s stay in Vienna; the second part, “Advent,” is a journal she kept during her analysis. Revealed here in the poet’s crystal shard-like words and in Freud’s own letters (which comprise an appendix) is a remarkably tender and human portrait of the legendary Doctor in the twilight of his life. Time double backs on itself, mingling past, present, and future in a visionary weave of dream, memory, and reflections.

A feminist icon as well as a major twentieth-century poet, H. D. (the pen name of Hilda Doolittle, 1886–1961) wrote several volumes of poetry, fiction, and nonfiction and was an exquisite translator of classical Greek drama.

Adam Phillips, whom John Banville called “one of the finest prose stylists in the language, an Emerson of our time,” was born in 1954 in Cardiff, Wales. A child psychotherapist, he is the author of On Balance and The Beast in the Nursery.
A warm and revealing portrait of H.D.’s mentor and friend.
— Philadelphia Inquirer

The book, with its appropriate title, is surely the most delightful and precious appreciation of Freud’s personality ever likely to be written. Only a fine creative artist could have written it…I can only say that I envy anyone who has not read it, and that it will live as the most enchanting ornament of all the Freudian biographical literature.
— Ernest Jones, Author of The Life and Work of Sigmund Freud