In the Sierra: Mountain Writings (Paperback) 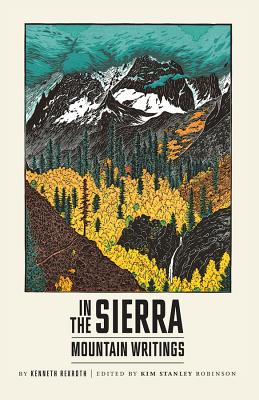 In the Sierra: Mountain Writings (Paperback)

Nature writings by one of America’s greatest poets, written out of a deep experience of the Sierras.

Over the course of his life, Kenneth Rexroth wrote about the Sierra Nevada better than anyone. Progressive in terms of environmental ethics and comparable to the writings of Emerson, Thoreau, Aldo Leopard, Annie Dillard, and Gary Snyder, Rexroth’s poetry and prose described the way Californians have always experienced and loved the High Sierra. Contained in this marvelous collection are transcendent nature poems, as well as prose selections from his memoir An Autobiographical Novel, newspaper columns, published and unpublished WPA guidebooks, and correspondence. Famed science-fiction writer Kim Stanley Robinson has compiled a gift for lovers of mountains and poetry both. This volume also contains Robinson’s introduction and notes, photographs of Rexroth, a map of Rexroth’s travels, and an amazing astronomical analysis of Rexroth’s poems by the fiction writer Carter Scholz.

Poet-essayist Kenneth Rexroth (1905-1982) was a high-school dropout, disillusioned ex-Communist, pacifist, anarchist, rock-climber, critic and translator, mentor, Catholic-Buddhist spiritualist and a prominent figure of San Francisco's Beat scene. He is regarded as a central figure of the San Francisco Renaissance and is among the first American poets to explore traditional Japanese forms such as the haiku.

Kim Stanley Robinson is the Hugo and Nebula prize–winning author of the Mars Trilogy and a trilogy of novels about climate change that go under the title Science in the Capital.
Nothing stands still in this poetry: the wind blows the trees, the lake water ripples and the ever-present road runs in and out of the hills.
— American Poetry Review

Rexroth seems to know what is under every stone before he looks.
— Christian Science Monitor

Rexroth sees the eternal in an instant.
— The Nation