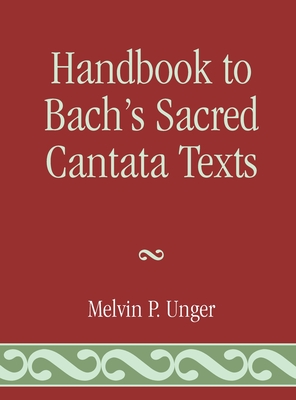 
Not On Our Shelves—Ships in 1-5 Days
The German church cantata of the eighteenth century was the culmination of a long tradition of Lutheran sermon music that used the proclamation, amplification, and interpretation of scripture to teach and persuade the listener. Bach's cantatas also served this didactic purpose and typically incorporate numerous allusions to scriptural passages or themes in their librettos. Unfortunately, many of these passages remain obscure to the twentieth-century musician because they demand a much closer familiarity with the Bible than is common today. The Handbook to Bach's Sacred Cantata Texts identifies scriptural references for the wording, imagery, and themes that Bach's listeners would have known. In addition, the religious or literary theme of each text is summarized within the specific context of the cantata as a whole. With interlinear translations and a full complement of indexes.
Melvin P. Unger is director of the School of Music at the State University of New York at Fredonia.