Evolution: The Story of Life on Earth (Paperback) 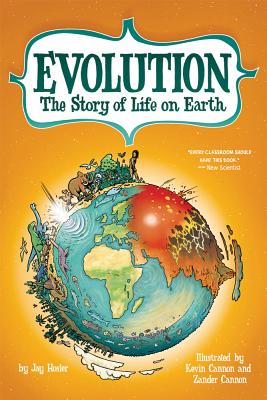 Evolution: The Story of Life on Earth (Paperback)

Illustrated by the brilliant duo Kevin Cannon and Zander Cannon, this volume is written by the noted comic author and professor of biology Jay Hosler. Evolution features the same characters introduced in the highly regarded The Stuff of Life: A Graphic Guide to Genetics and DNA, now here to explain the fundamentals of the evolution of life on earth. On the heels of explaining to his planetary leader the intricacies of human genetics in The Stuff of Life, the intrepid alien scientist Bloort-183 is charged in this sequel with covering the wider story of evolution. Using the same storytelling conceit that Plenty magazine declared "so charming that you won't even notice you've absorbed an entire scientific field" and that caused Seed to pick The Stuff of Life as a best book of 2008, Evolution brilliantly answers Wired's demand, "What's the solution to America's crisis in science education? More comic books!"

Evolution, the most accessible graphic work on this universally studied subject, takes the reader from earth's primordial soup to the vestigial structures, like the coccyx and the male nipple, of modern humans. Once again, the award-winning illustrations of the Cannons render the complex clear and everything cleverly comedic. And in Hosler, Evolution has an award-winning biology teacher whose science comics have earned him a National Science Foundation grant and an interview on NPR's Morning Edition.

Jay Hosler is a biology professor at Juniata College, and a cartoonist. He enjoys telling stories about science and the natural world, and his first graphic novel (Clan Apis) won a Xeric Award and was selected for YALSA's "2002 Popular Paperbacks for Young Adults." His book Evolution: The Story of Life on Earth, was a 2011 Junior Library Guild selection, a nominee for YALSA's 2012 "Great Graphic Novels for Teens," and has been included in the Texas Library Association's "Maverick Graphic Novel Reading List." He lives in central Pennsylvania with his wife and his two little nerdlings.

Illustrator Kevin Cannon has worked for clients ranging from the National Oceanic and Atmospheric Administration to DC Comics, collaborating on such titles as The Replacement God and Smax and winning two Eisners for their work on Top 10.

Illustrator Zander Cannon has worked for clients ranging from the National Oceanic and Atmospheric Administration to DC Comics, collaborating on such titles as The Replacement God and Smax and winning two Eisners for their work on Top 10.

“It is not often that the books I am asked to review go missing. After hours of searching, I found the errant item, with the spine cracked, in my teenage son's room--an otherwise book-free zone. I can offer no higher recommendation . . . I am not sure why comic books make words like alpha-proteobacteria less daunting, but they do. Every classroom should have this book.” —New Scientist

“Written by a nonalien biologist and illustrated by a talented (and nonrelated) duo in cartoon format, this book is funny, fun, and authoritative, and includes talking mitochondria and a charming song-and-dance routine by a male bowerbird seeking to be sexually selected.” —Dolly Setton, Natural History Magazine

“The most accessible graphic work on this universally studied subject.” —Ian Paulsen, The Guardian blog

“It's hard to imagine instructional science cartooning better than this.” —Booklist

“If you like comics, you'll like this book. If you're interested in evolution, you'll like it even better. It's got a lot of information presented with a lot of fun. Ideal for high school and college students and teachers, and anyone who wants to enjoy the story of evolution.” —Kevin Padian, President, National Center for Science Education

“From obsequious extraterrestrials to s'mores-eating early humans, this serious comic book manages to be fun and entertaining as well as accurate. (Maybe not about ancestral marshmallows, but readers will sort out the humor and snark from the science!) The story of evolution on Earth has rarely been presented in quite so entertaining a manner.” —Eugenie C. Scott, Executive Director, National Center for Science Education

“Biology is a dynamic subject and I am always looking for new ways to reach my teenage students. Evolution was an excellent way to reinforce the concepts we cover in class. The graphic novel was written and illustrated in such a way that automatically grabbed the students' interest. Students learn best when they are having fun in the midst of it. This entertaining and engaging book makes learning enjoyable.” —Bertha Vasquez, biology teacher, G.W. Carver Middle School, Miami, FL