The Land Has Memory: Indigenous Knowledge, Native Landscapes, and the National Museum of the American Indian (Paperback) 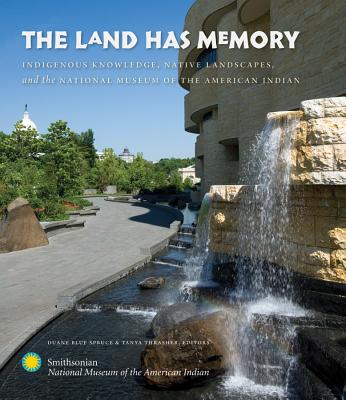 The Land Has Memory: Indigenous Knowledge, Native Landscapes, and the National Museum of the American Indian (Paperback)

By Duane Blue Spruce (Editor), Tanya Thrasher (Editor)
List Price: $32.50
Our Price: $29.00
(Save: $3.50 11%)
On Our Shelves Now at:
In the heart of Washington, D.C., a centuries-old landscape has come alive in the twenty-first century through a re-creation of the natural environment as the region's original peoples might have known it. Unlike most landscapes that surround other museums on the National Mall, the natural environment around the Smithsonian's National Museum of the American Indian (NMAI) is itself a living exhibit, carefully created to reflect indigenous ways of thinking about the land and its uses.

Abundantly illustrated, The Land Has Memory offers beautiful images of the museum's natural environment in every season as well as the uniquely designed building itself. Essays by Smithsonian staff and others involved in the museum's creation provide an examination of indigenous peoples' long and varied relationship to the land in the Americas, an account of the museum designers' efforts to reflect traditional knowledge in the creation of individual landscape elements, detailed descriptions of the 150 native plant species used, and an exploration of how the landscape changes seasonally. The Land Has Memory serves not only as an attractive and informative keepsake for museum visitors, but also as a thoughtful representation of how traditional indigenous ways of knowing can be put into practice.