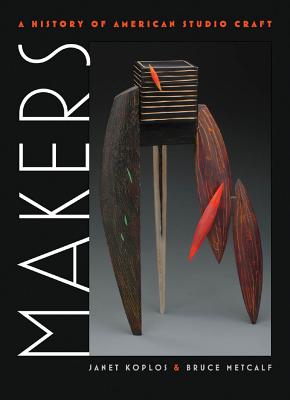 
Not On Our Shelves—Ships in 1-5 Days
Here is the first comprehensive survey of modern craft in the United States. Makers follows the development of studio craft--objects in fiber, clay, glass, wood, and metal--from its roots in nineteenth-century reform movements to the rich diversity of expression at the end of the twentieth century.

More than four hundred illustrations complement this chronological exploration of the American craft tradition. Keeping as their main focus the objects and the makers, Janet Koplos and Bruce Metcalf offer a detailed analysis of seminal works and discussions of education, institutional support, and the philosophical underpinnings of craft. In a vivid and accessible narrative, they highlight the value of physical skill, examine craft as a force for moral reform, and consider the role of craft as an aesthetic alternative.

Exploring craft's relationship to fine arts and design, Koplos and Metcalf foster a critical understanding of the field and help explain craft's place in contemporary culture. Makers will be an indispensable volume for craftspeople, curators, collectors, critics, historians, students, and anyone who is interested in American craft.