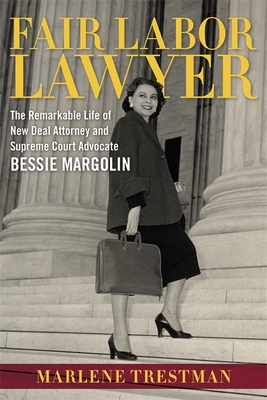 Margolin launched her career in the early 1930s, when only 2 percent of America's attorneys were female and far fewer were Jewish or from the South. Among other numerous accomplishments, she defended the constitutionality of the New Deal's Tennessee Valley Authority, drafted rules establishing American military tribunals for Nazi war crimes, and shepherded through the courts the Fair Labor Standards Act of 1938. Margolin culminated her government service as a champion of the Equal Pay Act of 1963. Her passion for her work and meticulous preparation resulted in an outstanding record in appellate advocacy: she prevailed in cases associated with twenty-one of her twenty-four Supreme Court arguments. Margolin shares an elite company of individuals who attained such high standing as Supreme Court advocates, and she did so when the legal world was almost entirely male.
Marlene Trestman is former special assistant to the Maryland attorney general and a former law instructor at Loyola University of Maryland's Sellinger School of Business and Management. A New Orleans native, Trestman had a personal relationship with Margolin that grew from common childhood experiences.