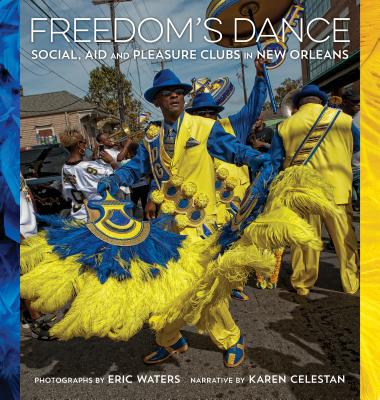 In this pivotal book, the captivating and kinetic images of noted photographer Eric Waters are paired with a collection of insightful essays by preeminent authors and cultural leaders to offer the first complete look at the Social, Aid and Pleasure Club (SAPC) parade culture in New Or-leans. Ranging from ideological approaches to the contributions of musicians, development of specific rituals by various clubs, and parade accessories such as elaborately decorated fans and sashes, Freedom's Dance provides an unparalleled photographic and textual overview of the SAPC Second Line, tracking its origins in African traditions and subsequent development in black New Orleans culture.

Karen Celestan's vibrant narrative is supplemented with interviews of longtime culture-bearers such as Oliver "Squirk" Hunter, Lois Andrews (mother of Troy "Trombone Shorty" Andrews and James Andrews), Fred Johnson, Gregory Davis, and Lionel Batiste, while interdisciplinary essays by leading scholars detail the rituals, historic perspective, and purpose of the Second Line. Freedom's Dance defines this unique pub-lic-private phenomenon and captures every aspect of the Second Line, from SAPC members' rollicking introductions at their annual parade to a funeral procession on its way to the crypt. Visually dazzling and critically important, Freedom's Dance serves as both a celebration and a deep exploration of this understudied but immediately recognizable aspect of the African American tradition in the Big Easy.
Eric Waters has been a professional photographer for more than forty years. He studied under the tutelage of the late Marion Porter, a respected African-American photographer. Waters' iconic "Squirky Man" photo (1992) appeared as part of the opening photo montage for the HBO series Treme. Karen Celestan is executive writer and editor in University Advancement and adjunct professor of English at Texas Southern University in Houston. She was formerly a senior program manager for Music Rising at Tulane in the New Orleans Center for the Gulf South at Tulane University.