A Confederacy of Dunces Cookbook: Recipes from Ignatius J. (Hardcover) 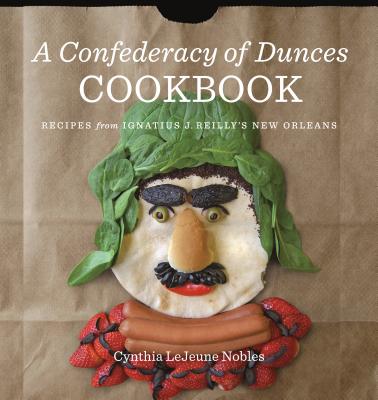 A Confederacy of Dunces Cookbook: Recipes from Ignatius J. (Hardcover)

In John Kennedy Toole's iconic novel, Ignatius J. Reilly is never short of opinions about food or far away from his next bite. Whether issuing gibes such as canned food is a perversion, or taking a break from his literary ambitions with an occasional cheese dip, this lover of Lucky Dogs, caf&eacute au lait, and wine cakes navigates 1960s New Orleans focused on gastronomical pursuits.
For the novel's millions of fans, Cynthia LeJeune Nobles's A Confederacy of Dunces Cookbook offers recipes inspired by the delightfully commonplace and always delicious fare of Ignatius and his cohorts. Through an informative narrative and almost 200 recipes, Nobles explores the intersection of food, history, and culture found in the Pulitzer Prize--winning novel, opening up a new avenue into New Orleans's rich culinary traditions.
Dishes inspired by Ignatius's favorites -- macaroons and toothsome steak -- as well as recipes based on supporting characters -- Officer Mancuso's Pork and Beans and Dr. Talc's Bloody Marys -- complement a wealth of fascinating detail about the epicurean side of the novel's memorable settings. A guide to the D. H. Holmes Department Store's legendary Chicken Salad, the likely offerings of the fictitious German's Bakery, and an in-depth interview with the general manager of Lucky Dogs round out this delightful cookbook.
A lighthearted yet impeccably researched look at the food of the 1960s, A Confederacy of Dunces Cookbook reaffirms the singularity and timelessness of both New Orleans cuisine and Toole's comic tour de force.

Author of The Delta Queen Cookbook and series editor for The Southern Table, Cynthia LeJeune Nobles is a food columnist for the Advocate of Baton Rouge, New Orleans, and Acadiana, and a member of the Newcomb College Culinary History Writers Group. She lives in Baton Rouge with her husband.