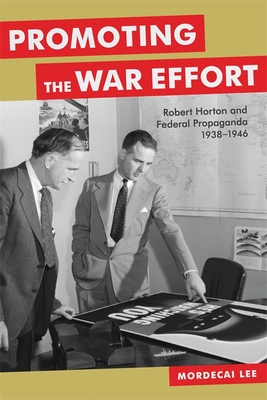 Though historians have largely overlooked Robert Horton, his public relations campaigns remain fixed in popular memory of the home front during World War II. Utilizing all media -- including the nascent technology of television -- to rally civilian support, Horton's work ranged from educational documentary shorts like Pots to Planes, which depicted the transformation of aluminum household items into aircraft, to posters employing scare tactics, such as a German soldier with large eyes staring forward with the tagline He's Watching You. Iconic and calculated, Horton's campaigns raise important questions about the role of public relations in government agencies. When are promotional campaigns acceptable? Does war necessitate persuasive communication? What separates information from propaganda? Promoting the War Effort traces the career of Horton -- the first book-length study to do so -- and delves into the controversies surrounding federal public relations.
A former reporter, Horton headed the public relations department for the U.S. Maritime Commission from 1938 to 1940. Then -- until Pearl Harbor in December 1941 -- he directed the Division of Information (DOI) in the Executive Office of the President, where he played key roles in promoting the New Deal, President Franklin D. Roosevelt's unprecedented third-term reelection campaign, and the prewar arms-production effort. After Pearl Harbor, Horton's DOI encouraged support for the war, primarily focusing on raising civilian and workforce morale. But the DOI under Horton assumed a different wartime tone than its World War I predecessor, the Committee on Public Information. Rather than whipping up prowar hysteria, Horton focused on developing campaigns for more practical purposes, such as conservation and production. In mid-1942, Roosevelt merged the Division and several other agencies into the Office of War Information. Horton stayed in government, working as the PR director for several agencies. He retired in mid-1946, during the postwar demobilization.
Promoting the War Effort recovers this influential figure in American politics and contributes to the ongoing public debate about government public relations during a time when questions about how facts are disseminated -- and spun -- are of greater relevance than ever before.

Mordecai Lee is a professor of governmental affairs at the University of Wisconsin--Milwaukee. He previously served as legislative assistant to a congressman, was elected to five terms in the Wisconsin state legislature, and was executive director of a faith-based nonprofit that engaged in public policy advocacy. He is author of The First Presidential Communications Agency: FDR's Office of Government Reports and Congress vs. the Bureaucracy: Muzzling Agency Public Relations.