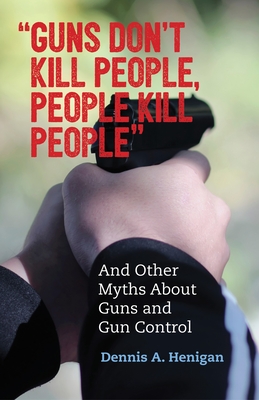 By Dennis A. Henigan


Special Order—Subject to Availability
“A must-read for every American who longs to bring sanity to our nation’s gun laws,” this book debunks the lethal logic behind the myths that have framed the gun control debate (Ariana Huffington, co-founder of HuffingtonPost)

The gun lobby’s remarkable success in using engaging slogans to frame the gun control debate has allowed it to block lifesaving gun legislation for decades. But is there any truth to this bumper-sticker logic? Dennis Henigan exposes the mythology and misguided thinking at the core of these pro-gun catchphrases, which continue to have an outsized influence on public attitudes toward guns and gun control. He counters the gun lobby’s messages by weaving together the most compelling current research and insights drawn from the grim reality of deadly gunfire in our homes and communities. Henigan charts a new path toward ending the American nightmare of gun violence.

Pro-Gun Myths Include:
“When guns are outlawed, only outlaws will have guns.”
“An armed society is a polite society.”
“The only thing that stops a bad guy with a gun is a good guy with a gun.”
“Gun control doesn’t work because criminals don’t follow the law.”
“Gun manufacturers shouldn’t be responsible for gun crime, any more than Budweiser is responsible for drunk driving.”
“We don’t need new gun laws. We just need to enforce the ones we have.”
“Gun control is a slippery slope to complete gun bans.”
Dennis A. Henigan is director of legal and policy analysis at the Campaign for Tobacco-Free Kids and formerly vice president of the Brady Center to Prevent Gun Violence.
Praise For the First Edition

“No one knows more about our epidemic of gun violence and no one can state the case for sanity better than Dennis Henigan, who eviscerates the Orwellian myths through which the NRA justifies so much death.”
—Richard North Patterson, author of Eclipse and Balance of Power

“Henigan effectively disarms the gun lobby’s arguments, fighting back with equal doses of common sense and uncommon insight....A must-read for every American who longs to bring sanity to our nation’s gun laws.”
—Arianna Huffington