The Pillar of Salt (Paperback) 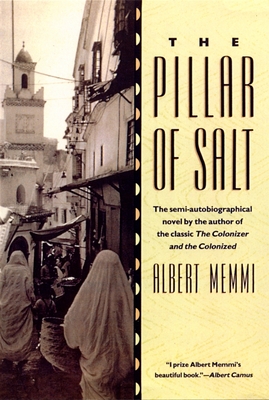 The Pillar of Salt (Paperback)


Not On Our Shelves—Ships in 1-5 Days
Originally published in 1955, The Pillar of Salt the semi-autobiographical novel about a young boy growing up in French colonized Tunisia. To gain access to privileged French society, he must reject his many identities – Jew, Arab, and African. But, on the eve of World War II, he is forced to come to terms with his loyalties and his past
Albert Memmi is the author of many books, including The Colonizer and the Colonized (also available from Beacon Press) and Arab and Jew.
'His father an Italian Jew, his mother a Berber, Benillouche struggles on the tattered fringe of the Tunisian ghetto for the very air he breathes. . . . A mature, thoughtful book.' – The New York Times

"Told with clarity of vision, a passionate sense of justice, and a warm heart." – New York Herald Tribune

"In the Celine-Sartre-Camus tradition of the contemporary French novel of despair, this autobiographical narrative has maturity, stylistic grace, and purpose ... A thoughtful, perceptive work." – Library Journal