Silencing the Past (20th anniversary edition): Power and the Production of History (Paperback) 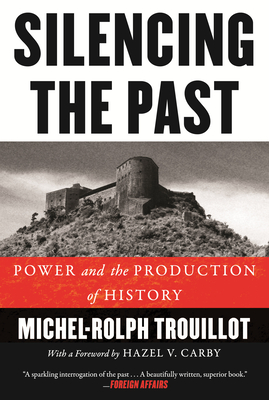 Silencing the Past (20th anniversary edition): Power and the Production of History (Paperback)


Not On Our Shelves—Ships in 1-5 Days
Now part of the HBO docuseries Exterminate All the Brutes, written and directed by Raoul Peck

Placing the West’s failure to acknowledge the Haitian Revolution—the most successful slave revolt in history—alongside denials of the Holocaust and the debate over the Alamo, Michel-Rolph Trouillot offers a stunning meditation on how power operates in the making and recording of history.

This modern classic resides at the intersection of history, anthropology, Caribbean, African-American, and post-colonial studies, and has become a staple in college classrooms around the country. In a new foreword, Hazel Carby explains the book’s enduring importance to these fields of study and introduces a new generation of readers to Trouillot’s brilliant analysis of power and history’s silences.
Michel-Rolph Trouillot (1949–2012) was one of the most prominent Haitian scholars working in the United States. He was the director of the Institute for Global Studies in Culture, Power, and History and Krieger/Eisenhower Distinguished Professor in anthropology at Johns Hopkins University. Hazel V. Carby is the Charles C. and Dorothea S. Dilley Professor of African American Studies, professor of American studies, and director of the Initiative on Race, Gender and Globalization at Yale University.
“A sparkling interrogation of the past. . . . A beautifully written, superior book.”
—Foreign Affairs

“Trouillot is a first-rate scholar with provocative ideas. . . . His work [is] a feast for the mind.”
—Jay Freeman, Booklist

“Now that so many grand projects of the past are up for reappraisal, Michel-Rolph Trouillot interrogates history, to ask how histories are, in fact, produced. . . . A beautifully written book, exciting in its challenges.”
—Eric. R. Wolf

“Aphoristic and witty, [Silencing the Past] shows that the two senses in which history is made, by doers and by tellers, meet in moments of evidentiary silence. . . . A hard-nosed look at the soft edges of public discourse about the past.”
—Arjun Appadurai

“Written with clarity, wit, and style throughout, this book is for everyone interested in historical culture.”
—American Historical Review

“[Trouillot was] a transformative presence in multiple fields [who] redefined the meaning of scholarship. . . . Trouillot taught us all how to read carefully, argue passionately, and write responsibly.”
—Colin Dayan, Boston Review